As some of you know, I went to Buddhist college. Though I was attracted to Naropa because Allen Ginsberg, Gregory Corso, Anne Waldman and William Burroughs (among others) were teaching there, a little bit of Buddhism soaked in and is always with me and sometimes colors (in a good way) how I see things.

There is, in Buddhism, the figure of the hungry ghost.  A revenant with a tiny mouth and a huge belly, constantly hungry but unable to sate itself through its miniscule mouth.  It’s meant to symbolize beings who crave insatiably.  Often, it refers to addicts.  In some cases, beings who eat, um, FECES and the bodies of dead humans. 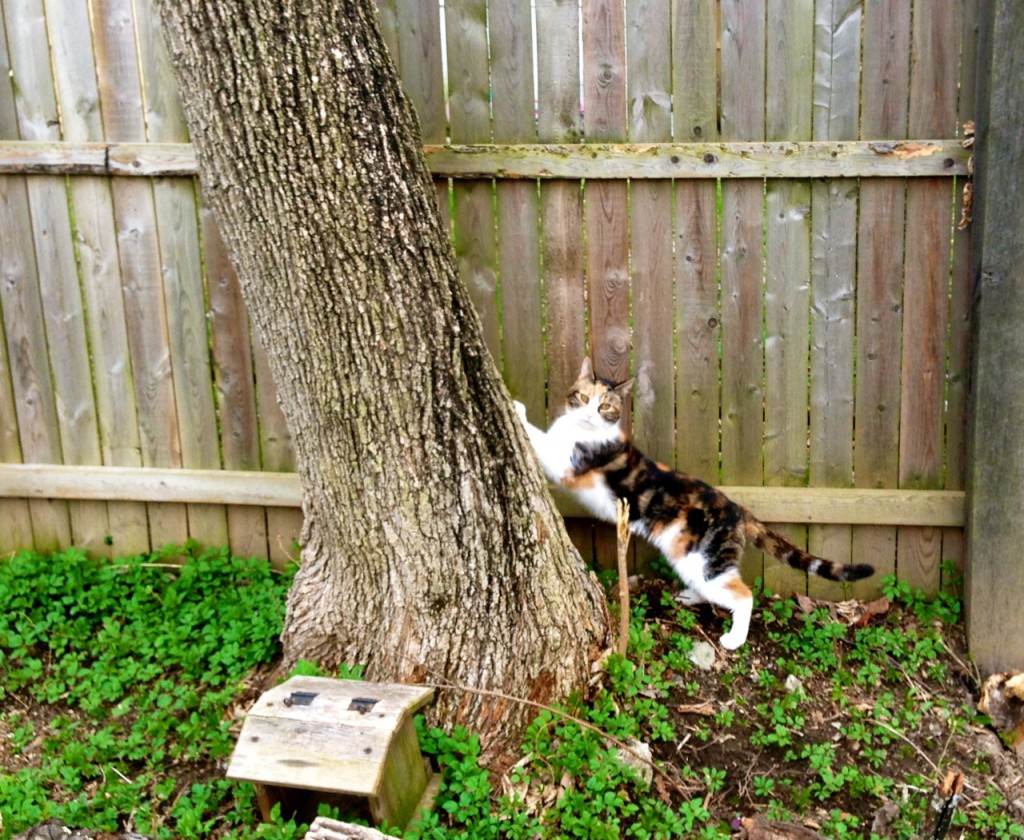 Lulu came in my window eighteen years ago and refused to leave.  She weighed five pounds and was very angry.  She clearly had not had a good start in life and didn’t like people, but she needed feeding, so she chose me.  She didn’t let me come near her but, even though I left the window open, she didn’t leave.

She would study me from a safe distance.  She wanted something, but it was unclear what that something might be.  She grew finicky about food and would go around the tiny East Village apartment I lived in then, knocking stuff off shelves, shredding toilet paper etc. until I bought food that pleased her.

Whenever she went outside, she would fight. She got her ass kicked a lot and once fell off a roof (I eventually found her, after three days, lying in a cellar behind a bar half a block away).  By the time she had broken her arm and two toes and run up thousands of dollars in vet bills, I stopped letting her out.

She would pace and scream, demanding to go out.  I got a leash and harness and took her out onto the streets of Manhattan.  She was horrified and never asked to go out again.

Eventually, she became almost friendly.  With me at least.  She hated the rest of the world, including a long succession of other cats and eventually dogs.  She has lived with me in NINE different abodes at this point.

One Summer, after I’d moved up to Woodstock, Lulu convinced a friend, Pam, who stayed in my house when I was at Yaddo, to cook chicken for her.  Lulu was horrible to Pam, but ate every scrap of Pam’s chicken.  When I got home, Lulu refused all food except chicken.  I’m a vegetarian. I had to start buying Lulu pre-cooked rotisserie chickens then donning plastic gloves to rip pieces of chicken off the chicken body and put them in the cat’s bowl.  Once the chicken was 48 hours old, Lulu would spurn it.  And wander the house, screaming and pushing objects off shelves, hurling her narrow body at walls until I went out and bought her a fresh chicken.

Nowadays, Lulu spends her days roaming the upstairs of the house here, where my office is.  She knocks stuff off shelves, screams and howls, tries to roost on my chest to drool on me ONLY when I am working.  She still wants something and I still don’t’ know what it is.  She is a hungry ghost.

A long time ago, I had a job taking care of elderly people.  Some were lovely, even though beset by painful ailments of aging. Others were cranky, miserable beings who were never satisfied by anything. Hungry ghosts.  There was something they had not gotten in this life and they were angry about it.

Lulu is like that.  And I keep thinking, since she came in MY window,  I’m the one who is supposed to somehow figure out what she wants and give it to her.  I’ve tried.  I treat  her with homeopathy, herbs, tranquilizers, chicken, attempts at affection, but nothing works.  She still WANTS.

No one can fill our big hungry ghost stomachs.  I think we have to come to terms with wanting or be doomed to die wanting.

I just took Lulu out to the garden to perambulate.  She made a few rounds then found the budding cat mint plant and parked herself in the plant, eating and rolling in it.  When I brought her back inside, she yelled at me for a while, bossed one of the dogs around, ate some chicken, and then passed out on my clean laundry, seemingly contented for the first time in a long time.