I like reading blogs where NOT MUCH HAPPENS.  The beauty of the mundane. A doorman being nice to a delivery person.  A broody hen.  My friend Isa’s victories wrestling her post-traumatic-brain-injury  brain.

I don’t read Angry People Blogs or Blah Blogs where people post 30 things a day out of COMPULSION rather than out of actual connection with the thing they are blogging.

Yet I cant’ seem to be breezy and quick in my own blog situation here.   I always INTEND to dash off a small, fleeting notion, then, I start having INTERWOVEN IDEAS and they won’t stop.

But this post is devoted to a small thing.  A golden bunny.  Here it is. 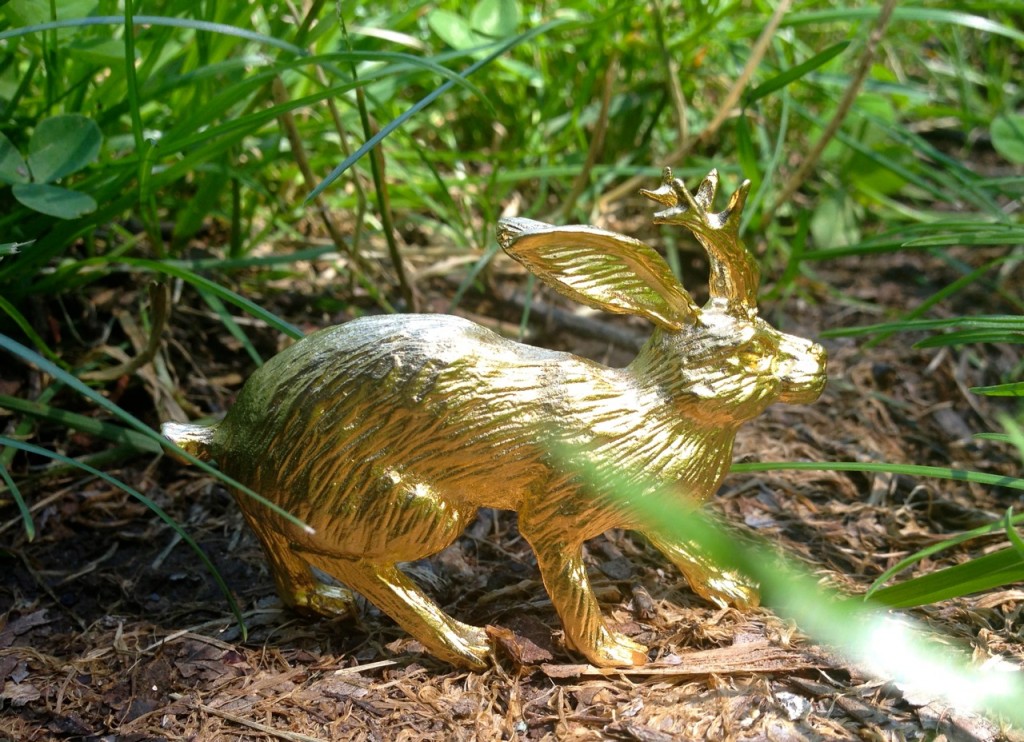 It’s a Jackalope really, but I like the way “small golden bunny” sounds.

The small golden bunny was made by a woman named Ria Charisse who has a lovely web site. Looking through it calmed me earlier today, when I was beginning to get vexed.

I had been looking at the comic Marc Maron’s Twitter feed.

Marc and I were friends for a while. He is a very funny and talented man. He could NEVER STOP BEING FUNNY though so hanging out with him was exhausting. I would go home and have to nap.   He was also incredibly driven.  Consumed. It made me feel boring and vaguely lazy by comparison.

We fell out of touch.

I started a Twitter account a few months back. I’m not at my best in 140 characters,  but, I have friends who are, so I do look at Twitter most days.

When I first started, I looked for Marc on Twitter  and followed his feed for a while.  He was doing a lot of  REALLY SUCCESSFUL GUY STUFF.   It made me feel boring and vaguely lazy again.  And also a little bitter.

For the most part, I am genuinely pleased for the successes of friends and acquaintances and total strangers. If someone is good at something, be it symphonies, quilts, yoga, horse whispering,  I get filled with a sense of wonder. My brain gets flushed with good chemicals and I like myself and the world a little bit better.

I don’t care for religion and I do not believe in GOD in the traditional sense, but I believe in small-case-plural-gods. 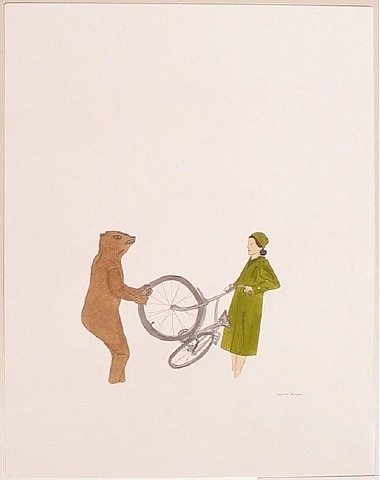 Trees and creeks are gods.

Other people’s successes usually make me want to be better at my own work, to make small gods that might ignite small gods in others.

But, for some reason, following Marc on Twitter, I started to feel diminished and bitter. He has made a living out of making fun of himself for feeling bitter.  And now I’m bitter about that.

I don’t know why that is or why I’m admitting this.

This was meant to be a fleeting post about the golden bunny I bought today.

When I got home and held the golden bunny in my hand, I literally felt my heart expanding like a watermelon of joy in my chest.

Here is a link to Kosa, where I bought the golden bunny, though I’m not linking to it because I think the owner will give me free stuff.

There is very little free stuff in this world until you’re famous enough to not actually NEED free stuff.

Marc Maron is probably getting free stuff as we speak.

I had heard this story, from my non-biological cousin, Shahram, that the poet Gregory Corso used to get free Agnes b suits.

In fact, Shahram told me that when Gregory Corso died, he was buried in a brown velvet Agnes b suit.

I have NO idea how Shahram knew this, but Shahram knows EVERYTHING.  His brain is extraordinary, possibly owing to the fact that my best friend, Jenny, his biological cousin, used to babysit him when he was 7 and she was 14 and she would grab him by the ankles and SPIN HIM around as fast as she could.

Jenny could have dropped Shahram on his head and killed him.  But we like to joke that it was this SPINNING that gave Shahram an unusual brain that indexes EVERYTHING. 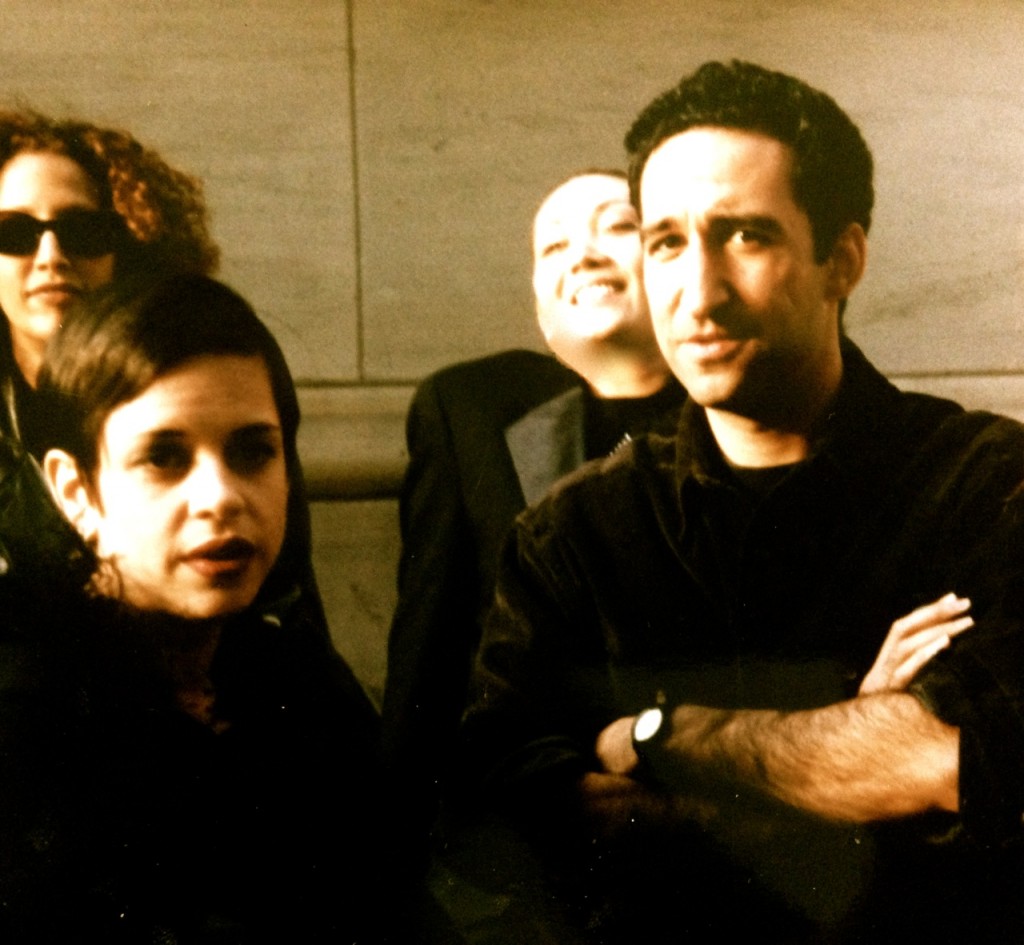 I think Shahram only met Gregory Corso a few times, and he did not attend Gregory’s funeral, but he knew that the man was buried in an Agnes b suit.

Knowing that Agnes b had given Gregory Corso a free suit for being a poet, I thought maybe she’d give me one too. I have long loved her clothes.  Perhaps she would love me.

At the time, I was about to do a taping for an HBO thing. So I called up Agnes b headquarters and explained the situation, how presumably several million people would see my outfit and could I please have some clothes. I was offered a 10% discount.

I wore old clothes.   I still have them.

And now, I have a golden bunny that filled me with small gods when I was bounding toward bitterness over an old friend who is successful because he can laugh at his bitterness.

So, it all works out.