My friend Richard Boch, one-time doorman at the Mudd Club, long time artist, and soon-to-be-wildly-successful-memoirist, had an opening the other day at  CR10 in Linlithgo, NY.

I adore Richard and his work too, but, it’s possible that the most exciting aspects of the evening were 1. The drive there with my friend Tim Ebneth and 2.  Having a rare chance to spend time with Pat Place.

Tim picked me up and we drove over together.  We were on the pretty country road approaching CR10 when we saw some boxes of toys in a field with a sign saying “Free to a good home.” 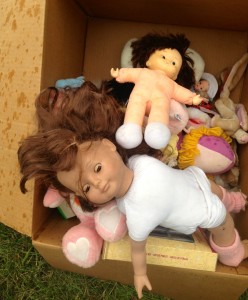 Tim slammed on the brakes . “I need that stuff” he said.

He was  flushed with excitement. He rushed out of the car, as if  would-be-broken toy-hoarders might suddenly materialize in the meadow and get to the loot first.

I admit, it WAS pretty exciting.

One of the things I love about country life is Weird Shit By The Side Of The Road.

Finding a cement garden gnome with a severed head in the middle of a street in Bed Stuy is kind of par for the course.  Discarded dolls, stuffed animals, and board games on a quiet, trash-free country road? Not so much.

Tim has a show coming up and is working on an installation piece.  I think the trove of toys will constitute half the installation. 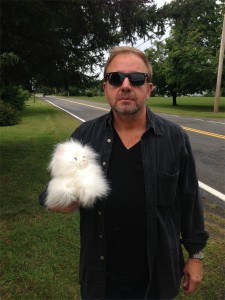 It’s possible Tim won’t speak to me now because I didn’t ask for photo approval before posting  pictures of him. 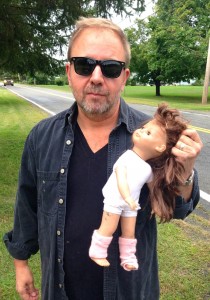 But I think we can all agree, Tim looks good (he is getting married to his boyfriend of fifteen years next week so, no, you can’t have him.)

After loading the toys into Tim’s car, we forged ahead to the opening.

Richard was glowing with distinguished handsomeness.  And his art looked good too.  Here is one of his prints, “A Little Pretty A Little Drunk”. 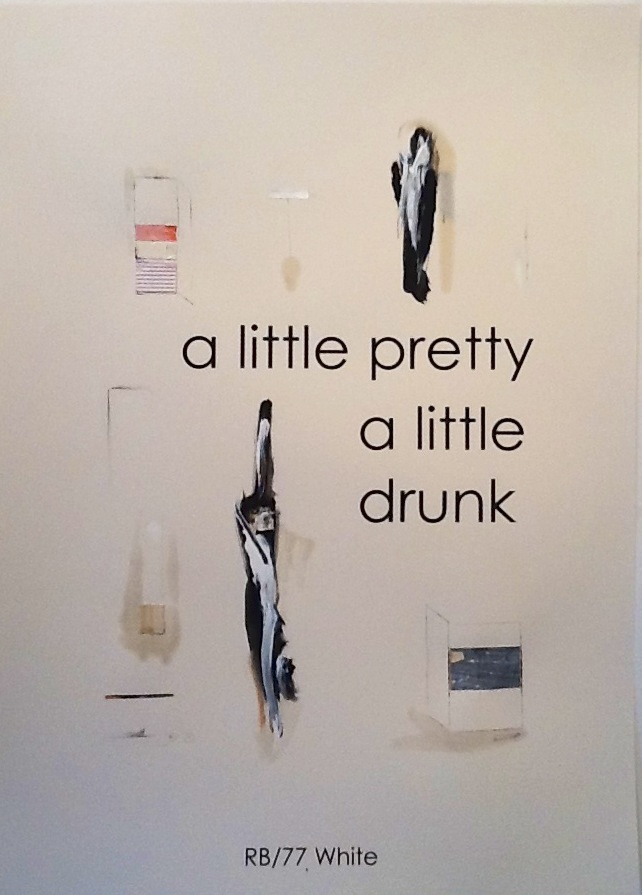 I’d barely looked at the art before noticing a platinum-colored head in the sea of darker heads: Pat Place.

Years ago, when my friend Julia, who I was just starting to play music with, suggested that Pat Place, THE Pat Place might come by and play with us, I was nearly paralyzed.

I had seen Pat  play with The Contortions and the Bush Tetras.  I was terrified at the prospect of playing with her.

The terror was unfounded.  Pat turned out to be funny, kind, an animal lover and a complete eccentric.  In short: Family.

I have some very special memories with Pat.  Our band, I Love Everybody, three girls and Stevie D, the boy drummer,  toured opening for Hole.  Most nights, Courtney Love would put in an appearance in our dressing room.  I liked Courtney a great deal, but she was in a real state during that time.  We never knew WHICH Courtney would come into the dressing room.  Angelic, beautiful, smart Courtney or Drunk and Crazy Courtney. 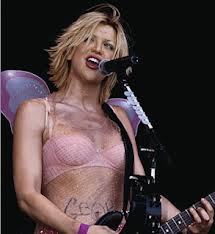 We were like deer-in-headlights staring at her.  Except Pat Place,  impassively gazing at Courtney Love’s baby doll dress and smeared lipstick.  Pat’s look seemed to say:  “I’ve seen all kinds of crazy, you’re just Kindergarten of Crazy.”

Also, on tour, there was Special Ordering At Denny’s. Pat was extremely health conscious long before the rest of the world.  She had lived hard and by the time she was in her late 30’s, she wished to live healthy.  To this end, she would try to order things that weren’t on the menu at places like Denny’s in rural American truck stops.

This was always a lot of fun to witness.

Pat was smart though.  Close to twenty years later, she looks great and is sane. 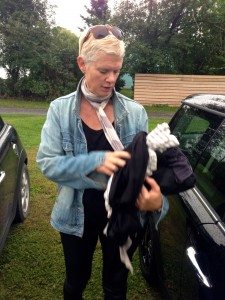 Lastly, here is a picture of me (though Laura the Hot Farmer claims it doesn’t actually look like me and I am making a bizarre squinchy face) taken on iPhone by the astonishing photographer Kate Simon, who was also at the opening. 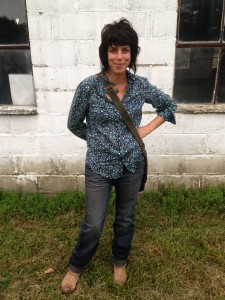 Kate and I were standing outside yakking and suddenly Kate said: I have to go inside, it’s raining.

There were maybe a few droplets falling.  Nothing I would actually think of as RAIN.  I said as much to Kate.  To which she said: You’re obviously not Jewish.  If you’re Jewish, this is rain.

3 thoughts on “I Love Everybody”