Lulu the cat died today at 12:20pm.  She went peacefully.  Or as peacefully as a Warrior Cat can go –which means she scratched me one last time. 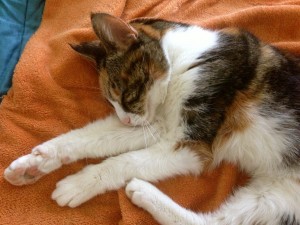 She died one day after James Gandolfini who died far too young.  Lulu was not young.  Though I think she was merely 18, not 19 as I had claimed in a previous post about her.

I’ve been sick for several days and had spent a lot of time with Lulu.  She was crankier and more restless than usual. She was still walking around and even jumping on things, but she would barely eat chicken, was vomiting, howling and agitated.

When my boyfriend took the dogs out for a walk this morning, I carried Lulu out to the garden.  She was skinny and wobbly, and her fur was a little dull. She didn’t do her rounds or go look for her catmint plant, she just  repeatedly tried  to escape the garden.

In that moment I realized:  She wants to go die.

I didn’t want her  having the violent or slow death she would find in the world beyond the garden.  That much I could spare her.  I called my vet to see if he would come put her to sleep at home.  It took some coercion, he doesn’t usually do house calls,  but he agreed to come.

I had about two hours.

With all my other cats, there was a moment, a LOOK.  They were usually fairly physically debilitated and there came a day when they looked at me and said,  in no uncertain terms: Time to die.

Not Lulu.  Lulu was a fighter. She fought everything and everyone on principle.  Even after she came in my window, 18 years ago, choosing me, she still resisted being tamed.  When I could finally wrassle her into a carrier and get her to a vet all those years ago, her file promptly got marked with EXTREMELY FRACTIOUS.

The vet had to wear GAUNTLETS to examine her and she still shredded his arms and got him on the face.

One time, when my friend Alex cat sat Lulu and the late Stinky, Lulu was in a cast from having broken her arm when she’d gone out to pick a fight with a cat five times her size.  Alex came over to ATTEMPT giving Lulu her pain pill and some food and found Lulu had RIPPED HER CAST OFF.  She also declined the pain medicine in no uncertain terms.

A few years back, I went down to Florida to teach a workshop at the Atlantic Center for the Arts.  Mickey stayed with a trustworthy dog sitter up in the woods but Lulu, who was diabetic at the time (she later cured herself of diabetes by insisting on being fed only fresh chicken)  and who would NOT allow anyone else to give her insulin shots, had to fly with me to Florida so I could take care of her. 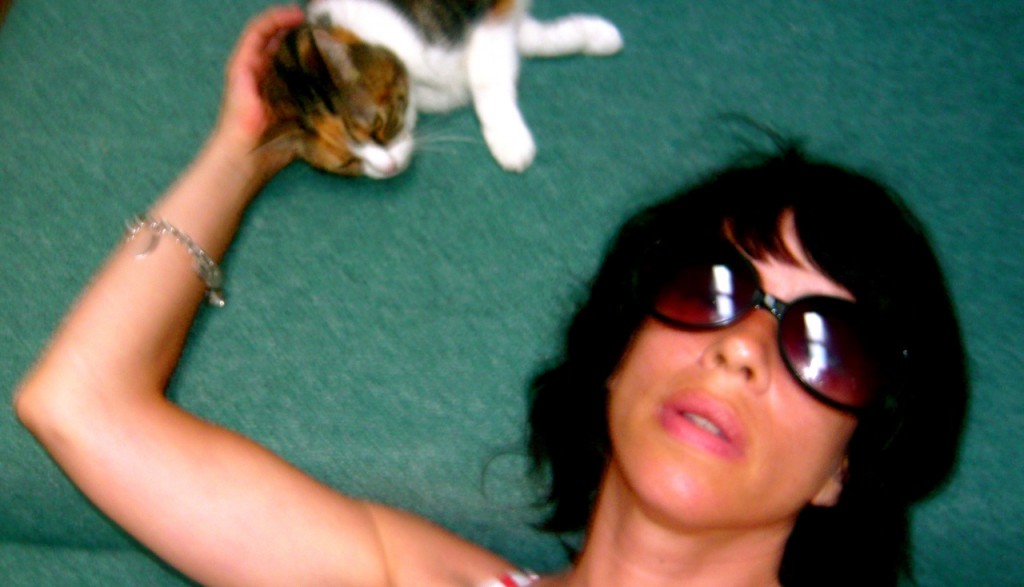 Lulu and Me Selfie in Florida

When the security people at the airport said I had to take the kitty cat out of the carrier so they could RUN THE WAND OVER HER,  I said: That’s probably not a good idea.

They thought I was trying to pull a fast one.

TAKE THE CAT OUT OF THE BAG, Miss, they said.

Lulu, for once, was actually terrified and did not rip the eyes out of the TSA workers.  Nor was she found to contain explosives.  At least, not that kind.

This morning, after the vet’s receptionist called back to say the doc would be by in two hours, my boyfriend went upstairs to say goodbye to Lulu.

She looked at him for a minute but that was about it.

I took her onto my chest, the only form of cuddling she’d ever gone in for, a quick chest-roosting with concurrent drooling. She stayed there for a few minutes and I told her all the things I needed to tell her.

About 30 minutes before the vet was set to arrive, I gave her a strong dose of animal tranquilizer.  She climbed up on my desk and stared out the window at the garden.

The tranquilizer hit her and she put her head down on her paws. When it seemed like she was really out of it, I carried her to her favorite spot on the bed and put her on the orange bath towel she liked.

I started weeping, getting a little hysterical.

Lulu had lived with me longer than any human, including parents or siblings and, as cranky as she was with the world, she showed me extreme tenderness.  She was, I think, determined to stay with me till I died. I was the only thing she ever understood about love.

I realized that crying hysterically wasn’t helping anything.  This was about HER death, not about me.

I stopped. I chanted Om Shanti to her over and over. I told her to go find peace.  She had her head in my hand.  She reached out and scratched me a little.  Then I said: Stop fighting, you won.

When the vet arrived, she hadn’t moved at all in about 15 minutes.  He went to touch her and she suddenly lifted her head and hissed.  He gave her a sedative and we waited.

I watched her little belly rising and falling with breath as he administered the death shot.  Then, her belly stopped moving.  She was gone.

After the vet left, I looked at her one last time, kissed her head, then wrapped her in her orange towel and put her in a cloth laundry bag. We couldn’t bury her in the garden, Stevie the Mexican Pup would dig her up.

I thought of a beautiful and stately place not too far away, which shall remain nameless because they may frown upon visitors burying cats in their woods.

We put the dogs and a shovel and Lulu’s body in the car and drove to the beautiful place.  Some people did see us walking into the woods, two dogs, and two humans, one carrying a laundry bag, the other carrying a shovel, but no one said anything.

We found a spot among trees, where a beam of sun cast light.  It overlooked a lake. 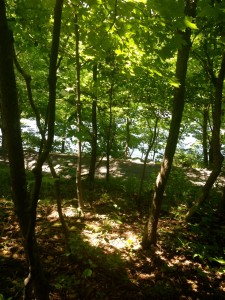 We dug a hole and put her in the ground.  He said some prayers.  We covered her grave with stones.

She may get dug up by wild animals, but probably not.  No one screws with Lulu, not even when she’s dead.

I don’t really care for that “Rainbow Bridge” business that is popular among pet owners.  The idea that when animals die they go to a field to wait for us,  sometimes for a REALLY long time, until we die too and then we all cross the “Rainbrow Bridge” together.

If there is an afterlife, I want my animal companions to go there and FUCK SHIT UP.  Be wild.  Be in nature. BE FREE.

That said, I have no doubt whatsoever that if anything remotely resembling a Rainbow Bridge exists, Lulu will camp out there and not BUDGE until I get there.

She was a cranky spitfire and she terrorized a lot of people, dogs, and other cats, but she loved me as fiercely as any being can love another. 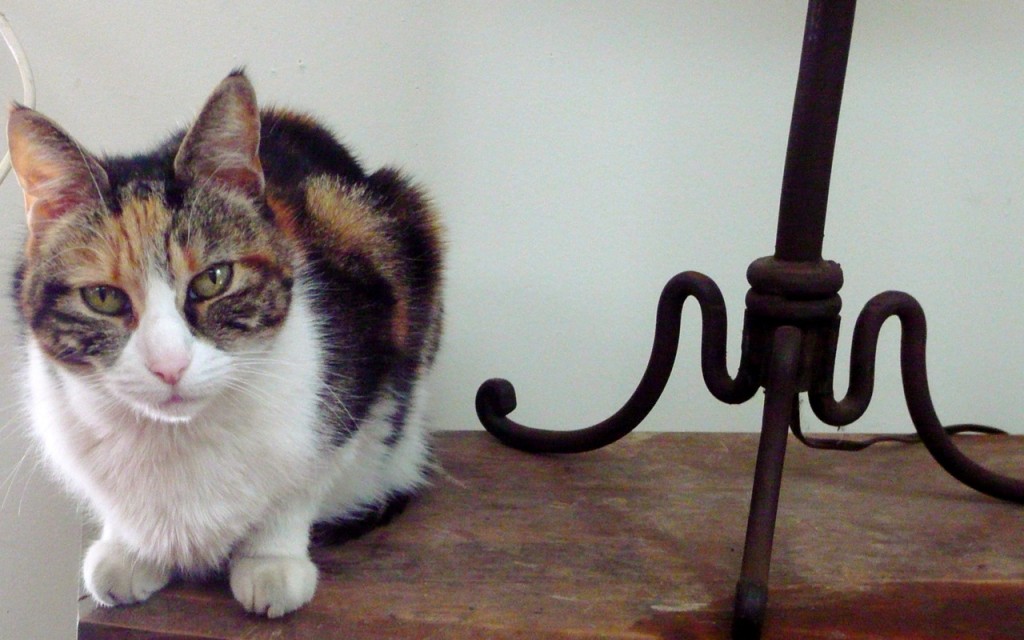