In July, I like to watch skinny men in tights ride bicycles up big mountains.

I’m not a sports person. I only enjoy partaking of solitary sports like swimming and cycling.  Watching other people do those things on TV always seemed as appealing as stabbing myself in the eye with a fork.  Then, one day about ten years ago, I watched a mountain stage of the Tour de France.

The mountain was so steep and endless, the men on the bicycles were in such obvious physical agony. It was riveting.

I’ve loved and ridden bicycles since I was a kid and, for most of my life, I commuted by bike, both in New York and abroad.  But the idea of wearing special outfits, the idea of even wearing a helmet or carrying a water bottle, had always seemed vaguely bourgeois — or like something only jocks did, those people who looked at me funny in high school when I was smoking in the bathroom.

If you had told me eleven years ago that I would look like this when I went out for a bike ride, I would have laughed really hard. 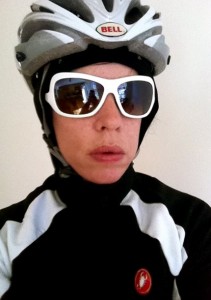 One summer, I was at the artists’ colony Yaddo at the same time as my novelist friend Donald Antrim. 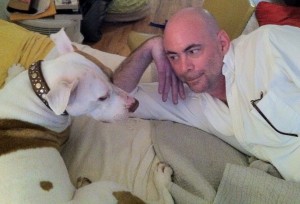 Donald is a serious cyclist. His cycling get-up (which reveals a great deal of man-flesh) was a frequent topic of dinner conversation at Yaddo.

I think there is a prevailing notion that artists do NOT partake of strenuous physical activity.  A little yoga or a dip in the pool maybe, but riding a bike 50 miles in a shiny tight outfit?  No.

One day that summer, I went into a bike shop in downtown Saratoga. I don’t remember what I was looking for,  but I ended up falling in love with a 1980’s Peugeot 10-speed bike. It was $200.  I felt weird spending even $200 on a bicycle.  But I  did.  And I  loved that bike and rode it daily, not just to get from Yaddo to town,  but for fun, exploring , able to go further because it was a better bike than what I was used to.   My legs got stronger.  I started feeling invincible and remembering the joy of childhood bike riding, when I rode for FUN, not just to get from point A to point B.

I asked Donald Antrim if he wanted to go for a ride one day and he smiled and said:  You won’t be able to keep up with me.

This may have been the instigating incident.

Twelve months later, I had a two-thousand-dollar Cannondale racing bike that I rode every day for 2-3 hours unless there were sheets of ice on the ground.

I started training with a pack of women interested in amateur bike racing.  Most were younger and hadn’t spent half their lives smoking cigarettes.   It was painful.  Plus, I don’t have any particular physical gift for bike riding.  However,  once I decide to do something, even if I SUCK at it, I keep banging my head against the wall until I can do it.  What I lack in talent, I make up for in obstinacy.

Which is perhaps how I came to admire Alexandre Vinokourov, a pro cyclist from Kazakhstan . Vino, as he is known, is the most determined, stubborn, lunatic cyclist I’ve ever seen.  Also, he sort of resembles Mickey. 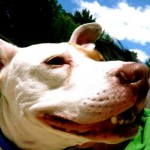 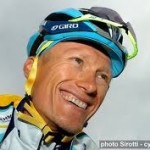 Vino doesn’t ride methodically, the way almost all the eventual winners of famous bike races ride.  He rides the way Stravinsky wrote music and Bunuel made movies.  Throwing methodology and rules out the window.   He grits his teeth, and RIDES HIS BIKE AS FAST AS HE CAN.

Like most of the big names in cycling, Vino was doping and got caught and served a suspension.  Then he came back after the suspension and shattered his pelvis in the 2011 Tour de France.  He was 37.  Old for a pro cyclist.   He retired.  For about five minutes.  He came back again and, at the age of 38, last summer, against staggering odds, won the gold medal at the Olympic men’s road race. 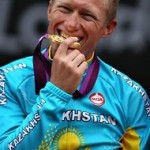 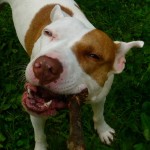 My own bike racing career didn’t go that well.  The only thing I was good at was accelerating.  I might have been a decent sprinter but, in a race, sprinting entails being buried in the pack of other riders, in REALLY close quarters,  weaving your bike, and running a high risk of crashing.   It is SCARY.

Also, I was constantly exhausted and hungry.  I started having trouble with yoga because my leg muscles were so bulbous and stiff.  I wasn’t getting my work done because my brain was flooded with weird Exercise Abuse Chemicals.

I couldn’t remember how or why the whole cycling thing had gone from being a joy to a compulsion, but it had.  It wasn’t fun, it was painful and it was making me stupid.

I started to slow down.  I had to actually taper off because otherwise I had panic attacks from the chemical changes in my brain — that had grown accustomed to enormous doses of exercise chemicals. It was freaky.

Now, I actually ride my bike WHEN I FEEL LIKE IT.  And there is joy in it again.  And, yes, when I’m out on a long clear stretch of country road and I see another cyclist ahead, something kicks in and I become Alexandre Vinokourov. I put my head down and ACCELERATE until I catch whoever is ahead of me.

Then, I go home, flip the TV on, and watch men in tights ride up big mountains.