A couple weeks back, I posted the first few pages of The Story of Giants, the novel I’m writing these days.  I threatened to keep posting from it till I’d posted at least all of the first chapter.  But I’m recanting.

Like everything, the publishing world has changed wildly since I put out my first book in 1997.  I have some friends who still publish the old school way,  actual physical  books in hardcover, but, mostly, that’s only profitable for Big Names, people who sell boatloads of book and have multiple Actual Bestsellers.

Other writers I know do direct-to-e-book stuff or even self-publishing.  With success.

I have no idea what I’ll do with the book I’m writing now, but I may end up publishing the old school way, in which case, having given big chunks of it away on my blog would not be all that great.

So, for now,  I’m going to keep this blog space for Actual Blogging  –about whatever I’m thinking about any given day or week.

Meanwhile, look, I just re-found this picture I took of Cooper Lake in Woodstock, NY. 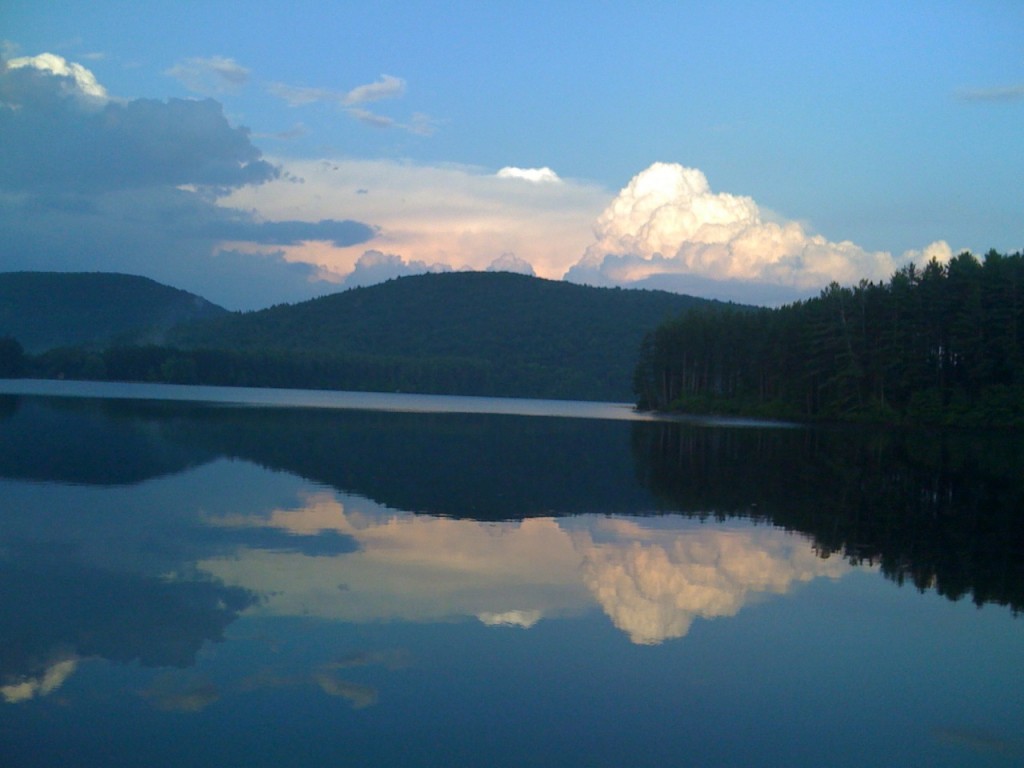 No, it’s not Photoshopped or anything.  In fact, it was taken either on the very first version of iPhone or possibly on the Motorola phone I had before the first iPhone.

Mickey and I used to go to Cooper Lake a few times a week to walk.  In Summer, when my ex-dog Spike, an avid swimmer, would sometimes visit, I’d sneak him in to Cooper Lake to swim even though he could have been arrested as a terrorism suspect for doing that as Cooper Lake is actually a drinking water reservoir (you should only freak out about drinking Spike-contaminated water if you live in Kingston NY, I believe it’s the water supply for Kingston and anyway, Spike swimming in it is nothing compared to decomposing deer carcasses, beer cans, and food wrappers, all these things presumably filtered out before the good people of Kingston turn on their taps.)   Spike is clean, see: 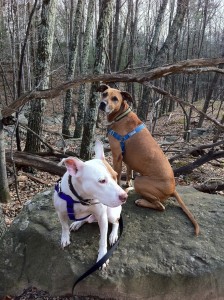 One evening, maybe three years ago, I was having heartache about the end of a brief but fierce relationship and I was really depressed.  I needed to be in nature.  I drove Mickey to Cooper Lake.  We parked and started walking, I wanted to see the lake with moonlight on it.  I’d never been there at night, when nature belongs to wild beasts I don’t know very much about.

We’d only been walking a few hundred  yards when we heard  coyotes yipping .  Like a LOT of coyotes.  It sounded like a thousand coyotes.  It also sounded like they were in the woods directly between where we were standing and where I’d left the car.  Some people will tell you coyotes won’t attack humans or large dogs.  But there had been a lot of stories circulating about coyotes hopping into people’s back yards to eat their small dogs and, in one case, supposedly trying to take a small child.   Rural legend?  Maybe, but, still, I was scared and so was my Bronx-born pit bull dog.

There was this moment where Mickey looked up at me and I looked down at him, both of us eyes wide with fear, and then I said aloud: RUN! And we both RAN as fast as we could back to the car.  Didn’t see a single coyote.  But at least I wasn’t depressed anymore.