So, it’s been scientifically proven that human beings need community.  Sangha. Without it, we get crazy. We are pack animals, like horses and dogs and sheep and cows and wolves. We need one another.

Some of us admire cats for their independent attitude, but, if we try to live like cats, we end up wearing hats made of tin foil. Or becoming increasingly cantankerous and hoarding plastic bags.

For most of the last twenty years, I’ve worked for myself and by myself.  But, much as interacting with other humans can sometimes be problematic, painful, etc. I’ve pretty much always forced myself to do it.  To see people and talk to people every day.

This is where yoga comes in. I attended my first yoga class 12 or so years ago.   My best friend, Jenny Meyer, was doing a very extensive yoga teacher training program and I was so sick of hearing her talk about yoga. I hated yoga.

Then I took a yoga class.  And really liked it. And went back the next day.  And the day after that.  My body felt good but also, there were things mentioned, non-harming, speaking the sweet truth, things I had long believed in and suddenly found in words and concepts.  There was also a yoga community. A sangha.  I sort of thought all the yoga people were freaks.  Then I remembered, I’m a freak, and these are my people.  Or some of my people.

I have short arms and a long torso.  This makes some of the yoga poses that women are traditionally good at, those gumby twisty poses where one wraps arms around oneself or under a leg, not that much fun. Jenny Meyer, my best friend, of course has long lovely monkey arms.  See here: 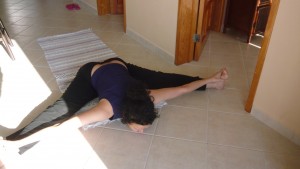 Recently, one of my favorite people in the world, the writer Kelly Sue DeConnick, posted on Twitter about having short arms like a T-Rex.  I have spent time with Kelly Sue’s arms (not in an intimate way, but, for example, we have been to Great Adventure together clad in skimpy outfits) and can assure you that Kelly Sue’s arms are not T-Rex arms.  Here is Kelly Sue: 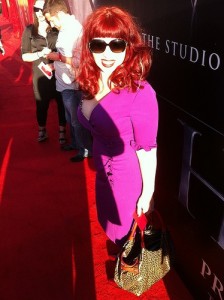 I have T-Rex arms.  Now I am part of a community, a Sangha, of women with T-Rex arms.  A community started by Kelly Sue.  Who I have not seen in the flesh in too long, but with whom, thanks to social media, I have some contact.

Here is me with one leg over a shoulder. My arms looks deceptively long in this picture.  But it’s the iPhone.  Making my arm look long when, in fact, my arm is barely longer than an iPhone. 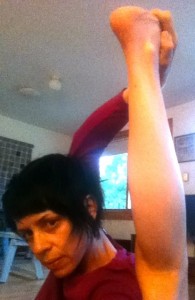 There was a story in the NY Times about a You Tube star, a young woman who basically never leaves her house.  She just stays in, making low-tech You Tube videos of herself impersonating other people, videos that literally millions of people watch.   And millions of people communicate with her.  But she’s all alone in her house.  Is that community?

On the other hand, there’s Suleika Jaouad, the young woman who contracted a horrible cancer and wrote about it in the Times and, as a result, has zillions of followers and many of these became actual friends who helped her as she battled cancer.

Our internet interactions aren’t the same as sitting down and comparing T-Rex arms on a water flume, but they are something.  Sometimes something really good.

We are social animals.  We are dogs and sheep and horses and people.

Here is Mickey with his old friend Candy, playing T-Rex.  Mickey and Candy both have short-ish arms.  Not full-on T-Rex arms, but they definitely look like T-Rexes when they stand on their hind legs and bat at each other with their arms. 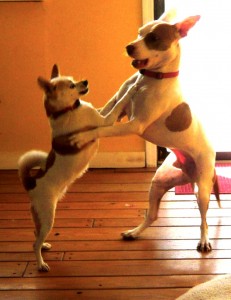 Can interacting through the sangha of social media keep us connected and  stave off a trip to the hat factory?

I dunno.   But, if it weren’t for Twitter, I wouldn’t know that Kelly Sue considers herself to have T-Rex arms.  So I wouldn’t have had my heart warmed by the thought of Kelly Sue.

I would have a whole different experience if I could go have coffee with Kelly Sue right now. But I can’t.  She’s in Oregon and I’m in New York.  So, for now, I’ll just take my T-Rex arms to yoga.

6 thoughts on “Sangha, T-Rex, and the long arms of Jenny Meyer”