The Brutality of Fact

This post has nothing to do with the above title, but I used to have a biography of Francis Bacon of that name.

The only brutal thing today, so far, is it’s still cold enough that Mickey, with very  little hair or body fat,  shivers and has to wear a coat to stroll down by the river and take a conquering pose on a block of cement. 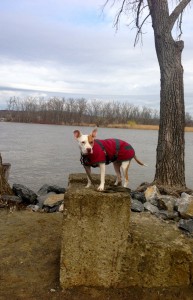 Francis Bacon made some paintings of  dogs. They were all pretty brutal-looking.  Mickey is not brutal.  His head is enormous and looks weaponized and some people cross the street when they see us coming — in spite of the fact that the worst he would do is lick them and try  winning their approval, exposing his pink stomach if necessary.

I didn’t know, when I adopted him six years ago, that forming a bond with a dog with a wedge-shaped head was some sort of political statement.  That I’d have to become hyper-vigilant to see that he behaves better than the average dog because, by virtue of his appearance, he is held to a different standard. I have literally feared for his life the few times he’s gotten away from me and been lost in the woods.  I had to worry someone would see a loose “pit bull” and shoot him on sight.

When I was in my early 20’s, I saw a MOMA retrospective of Francis Bacon.   I was floored.  I’d seen some good art as a kid, but this was the first time that paintings spoke to me.  The marriage of violence and beauty. The way the two co-existed.  This was my experience of the world.  A beautiful violent place.  And here it was, on canvas.

Francis Bacon’s work was my entry into truly loving visual art. I became staggered by Caravaggio.  I wept uncontrollably at a Rembrandt show in London.  I wrote a really bad screenplay about stealing a great work of art and keeping it in my apartment for a while.  Later, I became smitten with the works of contemporary artists, Fiona Rae, Marcel Dzama, 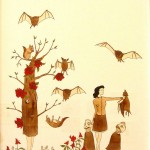 I’ve vowed to keep these blog posts small.  Little outbursts.  Sometimes, maybe, beams of light or possibly even magic.  Sometimes expressions of frustration.  But short.  Usually with pictures.  Mostly of my dog(s).

So this is the end of my outburst about winter, Francis Bacon, and the shape of my dog’s head.