I was walking through the park just off Warren Street here in Hudson.  Mickey was with me, wearing his attention-getting cone. 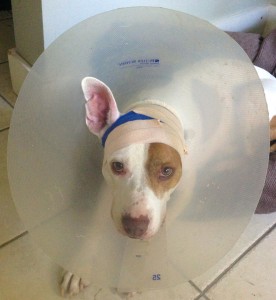 Mick was moving pretty slowly, trying to sniff bushes, but getting his cone entangled, then getting depressed about this and refusing to pee.

An elderly man was sitting on a bench drinking a soda.

“What’s on his head?” The man pointed to Mickey’s cone.

The man expressed sympathy over the cone.  Somehow, we got onto the subject of food.  The man volunteered that he tries not to eat red meat.

“Chicken is kind of worse,” I said.  “The way the animals are grown is particularly vile.”

“When I eat a steak I slice the fat off,” the man said.

“Ah.” I said.   I guess he’d forgotten the part where he doesn’t eat red meat.

“My doctor’s a vegetarian,” he said.

“Bill Clinton is a vegan.” I said.

“Yeah.  His heart.” I said, tapping my own chest cavity.

“Maybe I should think about that.” The man said.

“Yeah.  Maybe. ” I said.  “I have to go, my dog is stoned,” I added after Mickey knocked his cone into another bush.

I urged my pumped-full-of-pain drugs dog out of the park and back to where we’d left the car.

Then, I got to thinking about chicken.

My friend Laura the Hot farmer wrote a good blog post about her 54 chickens.  It’s very funny. You can read it by clicking here. 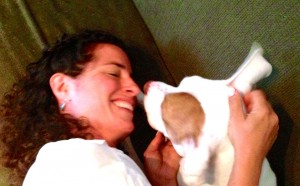 Laura and Mickey make out

It’s interesting that people operate under the illusion that eating chicken is healthier than, say, eating a burger.  Factory farmed chickens are raised in even worse conditions than cows.  More drugs, more filth, more fear.  Their bodies are soaked in flavored water to make them taste CHICKENY. 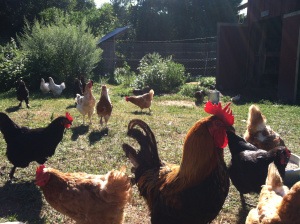 People who consider themselves health-consciours will often order something like a Caesar salad with strips of CHICKEN on it.

Unless folks are buying chicken (or any animal products)  from Laura the Hot Farmer, or someone like her, they are eating drugs, filth and fear.  Chicken is NOT “better” than beef or pork or veal or hot dogs or eggs or, for that matter, the drive-through window at McDonalds.  It’s all the same.  Seriously.

I have this theory.  That the corporatization of our lives started with factory farming.  It was the discovery of antibiotics in the 1940′s that facilitated raising livestock indoors, in overcrowded, unsanitary conditions. This started driving real farmers out of business.  It’s been seriously down hill from there for us humans  as far as living with any kind of connection to the natural world.  But that’s a whole other story.

This one was just a chicken story.