I’ve mentioned that I’m a Boring Person.  I like leading a quiet, simple life with some degree of stability and predictability.  I am not very spontaneous.  And I have a meltdown if someone stops by unannounced.

My first couple of years living upstate were traumatic as I came to know THE DROP BY.  I was living in Woodstock and,  in Woodstock, unless you are a TRUE shut in, (I am only a semi shut-in) everyone knows where you live.  And drops by.  It was really good for Mickey’s socialization after he got sprung from death row and came to live with me and had NO idea how to interact with the world.  Drop bys were helpful in getting him used to all kinds of people entering his space.  He even started to like it. But I didn’t. 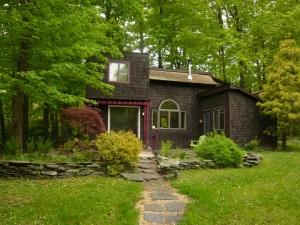 Woodstock House aka The Drop By House

I’d always heard stories of NICE country drop bys, even remembered some from childhood. Neighbors bringing pies or seeing if you needed help with the various vagaries of country life.  But the old school drop by may be a thing of the past.  My drop byers were acquaintances who happened to be driving by, saw my car in the driveway, knew I was always home “working”, (their quotes, not mine) and so, would drop by — and usually expect some level of civility and hospitality.  It was awful.

I do like people. But I grew up as an only child, moving every six months till I turned 18 when I planted myself in lower Manhattan. There, I shared a studio apartment with my close friend Bliss. Bliss and I both had low-paying full-time jobs and, when we weren’t working, we were drunk and dancing. Our tiny tenement apartment was in the back of a walk-up with no doorbells and we didn’t have a phone. We were safe from drop bys.  Plus, we didn’t have any other real friends. We had an intensely close friendship, kind of like Laverne and Shirley if they’d been CBGB’s habituees on downers with dyed hair and dog collar jewelry.  It’s unlikely anyone WANTED to drop by.

A few years down the line, Bliss fell in love and married and moved back to the country to have children.  I forged ahead and belatedly went to college in Boulder, Colorado.  I shared a little house with a succession of roommates.  We lived downtown.  I had a bunch of scraggly poet friends, some of them very prone to DROPPING BY. My various roommates enjoyed and even encouraged this behavior.  I had the back-facing bedroom and, if I managed to see the potential drop-byer coming, I’d hide in my room, ducking down below window-level until the drop-byer had given up and gone to drop by on someone else.

I moved back to NYC and, by the time I was ready to leave for good, 20 years later, I had in fact learned how to have friends and sometimes even be spontaneous,  but there are no DROP BYS in NYC (that’s why people LIVE in NYC.)

After a few years in Woodstock, living victim to random drop bys, I ran out of money and sold my house, then took a rental on a semi-remote farm outside Saugerties. 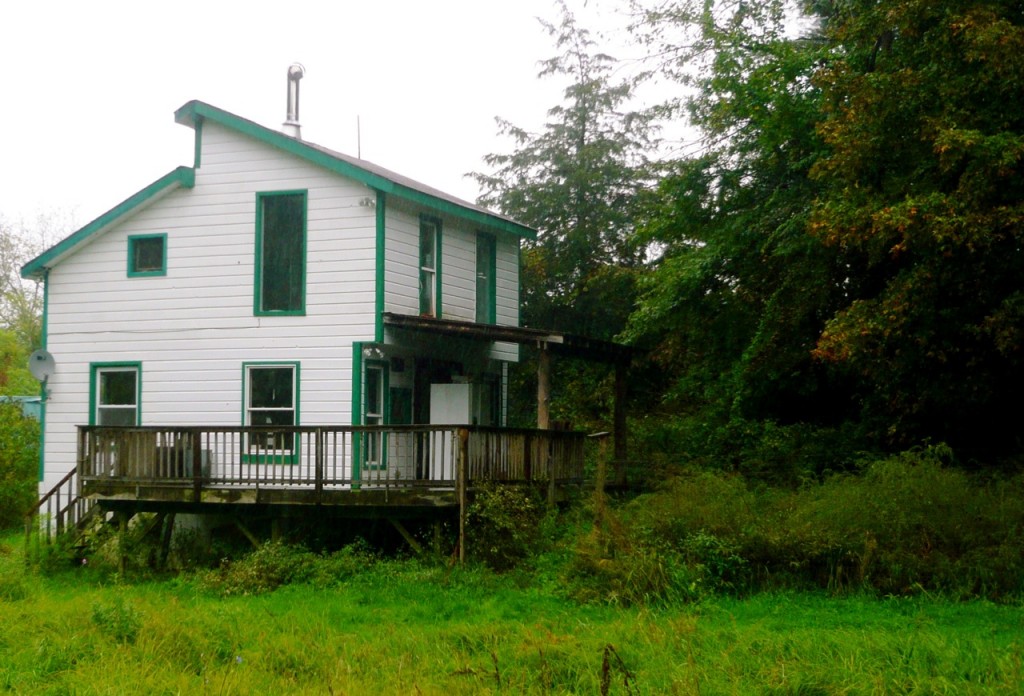 I lived in a  converted hay barn a few hundred yards from a farmhouse where a woman named Polly lived.   Polly and I became close friends. 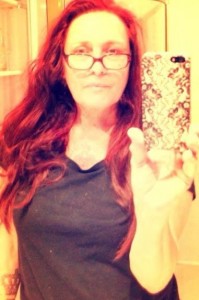 Polly had the space (and the temperament) for dinner get-togethers, barbeques, and other nice social things people do and I often took part in these festivities.   Polly is a person others are drawn to.  And brings to mind a quote from a Will Self story I love: “…she exuded a certain wholesome quality, as palpably as if a vent had been opened on her forehead and the smell of bread baking had started to churn out.” Though Polly will no doubt dispute the accuracy of  “wholesome” as applied to her.

Polly was prone to receiving drop bys and, from the second floor window of my little house, I could  watch the people who were dropping by on her and pick and choose the times to join in the drop-by fray.  It was perfect.  Polly was my inadvertent Drop By Gatekeeper.

Once a nomad, always a nomad though and, after a year living on the farm I got restless.  I moved back to Brooklyn, to Bed Stuy where there was absolutely no chance of drop-bys.  After a year there,  I realized I really am a country girl and I moved back upstate, to remote Olivebridge, about 30 minutes west of Woodstock.  It was lovely and cheap.  But it was a hotbed of DROP BYS. 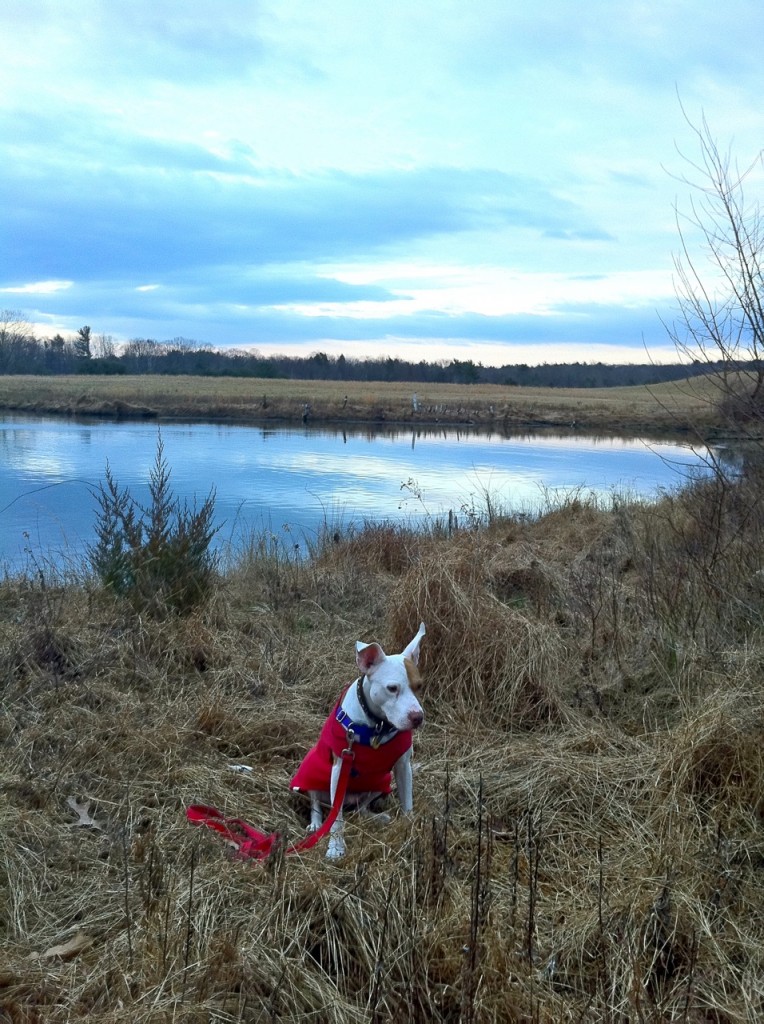 At first, there were DAILY drop-bys from my landlord who didn’t really have any place to go after renting his house to me.  He had installed a trailer on his girlfriend’s land a mile down the road, but the girlfriend would get sick of the sight of him and tell him to take a hike.  So he would.  To his house, aka, MY house. I’d be in the middle of doing something compromising like  typing while naked, or manually pulling half-digested grass clumps out of Mickey’s butt, when I’d look up from what I was doing and find my 80-year-old-landlord watching me.

One day, I lost it and screamed at him, waving my lease in his face.  Soon after, he went to winter in Florida.  But in his place were  other ne’er do well drop-byers from up or down the road.  There was the alleged male hustler who had bought the land across the road and would periodically turn up, standing in the road, staring from his land to my house.  The homesteader neighbors looking for their chickens or goats or sometimes foraging in my woods for dead animal carcasses to feed their dogs.

The only nice drop bys were from friend and neighbor Farmer Thom who would  occasionally do a drop by on his tractor.   It was so novel to get a drop by from a guy on a tractor that I didn’t mind. Plus, he usually brought me something.  Vegetables, a portable heater, a plunger. 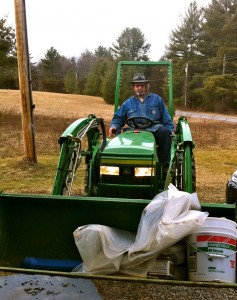 Thom Drop By On Tractor

A year and a half ago,  I moved to Hudson. Hudson is sort of a microcosm of all the good aspects of Brooklyn.  People of various races, economic brackets and sexual preferences all merging in a small city on the edge of the Hudson river.  It’s urban but surrounded by beautiful farmland.  Small enough to still feel like a village. People are friendly but there is just enough crime to keep the citizens slightly wary and unlikely to give or receive drop-bys.

If I walk outside, I am extremely likely to have a naturally-occurring drop-by, i.e. an unplanned encounter with an acquaintance. I have learned to (mostly) appreciate these interactions and (mostly) do not duck into the first alley when, from a distance, I spot someone I know.

I can deal with and actually enjoy Naturally Occurring Random Social Interaction.  As long as it isn’t a gateway drug to receiving DROP BYS.

5 thoughts on “The Curse Of The Drop By”