I’m heading off to teach yoga in a few minutes and am having the standard-issue mix of dread and slight excitement at the prospect of cajoling people into doing unusual things with their limbs and their minds for 90 minutes.

I don’t have that fear with yoga.  There is no killing yoga. It would just come back.  Like a zombie.

Zombies have outshined vampires and well-to-do housewives as a national obsession.  And seem in no danger of leaving.

I like magical creatures, mythologies, Sci Fi, and zombies.  I talk to trees and inanimate objects (and people and animals too)  and consider everything imbued with a spirit.  Including zombies.

I have the notion that, if the need ever arose,  I could reason with a zombie the same way you can sometimes reason with or whisper to a difficult dog or horse.

Maybe I’ll be in big trouble when the zombies come.  Or maybe I’ll have a lot of a work as a Zombie Whisperer.

I wrote  a short story, Zombie Hookers of Hudson 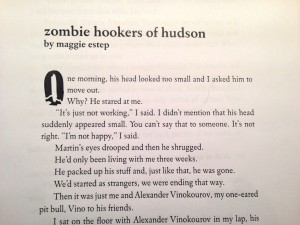 , because I like zombies, and also because I was asked to contribute  fiction for The Marijuana Chronicles, coming July 2nd from Akashic Books.

Rather than drum up some long-ago shenanigans from my weed-smoking youth, I invented pot-smoking zombie hookers.  My zombie hookers are pretty benevolent.  Because they were invented by someone who thinks she’s a  Zombie Whisperer.

I think zombies are popular because we all think the world is ending.  Pretty much every culture and civilization since the beginning of time has thought their world was ending.  In our time, there may be more of a case to be made for this outlook. The earth is heating and the weather is getting really fucking wonky. Even some Republicans admit this by now.

Most of my life,  I’ve had recurring post-apocalyptic dreams.  As a youngster, I loved Planet of the Apes, Road Warrior, and Bladerunner because these movies looked like the landscapes in my dreams.

When I first moved to NYC at age 17, Bladerunner played every weekend at the St Marks Movie Theater.  And I went EVERY WEEKEND.  My friend Bliss and I would sit there, reciting it pretty much line for line, smoking lots of weed and cigarettes (this was Lower Manhattan in the 1980’s, you could shoot  heroin in your jugular on the subway and no one would look twice, though I never actually tried THAT) and cooing over Rutger Hauer and Daryl Hannah (those standing backflips of hers were particularly awesome, watch here, though it is heartbreaking.)

Sometimes, leaving the theater, it was hard to distinguish the barren, bombed-out-looking landscape of the Lower East Side from the sets of Bladerunner.

Movies like Bladerunner, Terminator, Planet of the Apes, 28 Days Later etc…are just manifestations of our collective unconscious same as Hieronymus Bosch paintings were in the 15th century. 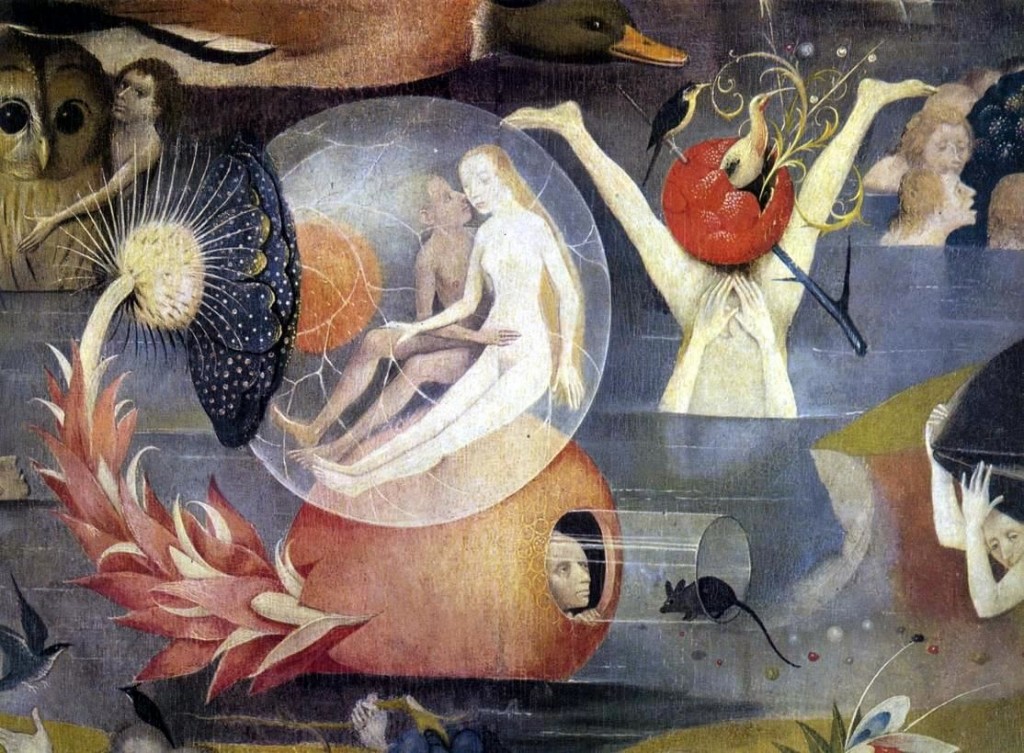 And yoga is the zombie of mind/body practices.

Yoga started a long, long time ago and, no matter what anyone does to it, no matter how many of us freaky yoga-loving loons interpret and transmit it, it keeps working and finding new converts and, for the most part, spreading well-being and some degree of peace.

Yes.  Yoga is a cult.  But,  pretty much everything is a cult.  Human beings like cults.  We like believing in the same things.  It makes us feel less alone.  We are a weird, conflicted species, celebrating individuality and original thinking, but all, at heart, believing the same thing:  That the zombies are coming and yoga will make it better.

4 thoughts on “The Zombie Whisperer”