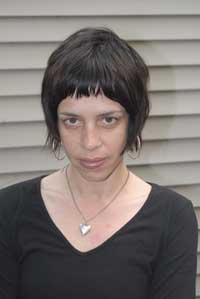 Maggie Estep grew up moving throughout the US and France with her nomadic horse trainer parents. She attended the Jack Kerouac School of Disembodied Poetics in Boulder, Co. and received a B.A. in Literature from The State University of New York.

She has given readings of her work at cafes, clubs, and colleges throughout the US and Europe and has also performed her work on The Charlie Rose Show, MTV, PBS, and HBO’s “Def Poetry Jam”. Her writing has appeared in The New York Post, Self Magazine, Village Voice, New York Press, Harpers Bazaar, Spin, and Nerve.com, as well as in dozens of anthologies including but not limited to BROOKLYN NOIR, THE BEST AMERICAN EROTICA, and HARD BOILED BROOKLYN.

She is currently at work on The Story of Giants.