The cat is not away.  As previously documented, though Lulu the Cat used to travel – at least around my old neighborhood in NYC — she is now 19-years-old and doesn’t get out much.

My boyfriend, however, IS away.  I’m not doing anything debauched in his absence, at least not yet, but I’ve already filled an enormous garbage bag with expired food, dish towels the color of gym socks,and old plastic containers, their sides yellowed like the teeth of an old horse.

One of the things I love in the philosophy of yoga is the concept of Aparigraha – non-hoarding.

Not grabbing for more than what we need.  Traveling lightly.

I’m not  a neat freak, nor even particularly tidy, but I hate excess, especially if it’s not aesthetically pleasing.  If my eye has to rest on any clutter, I want it to be really interesting.  Like some of the rooms at the Mutter Museum, especially the one filled with cases of skulls.

I spent most of my teen years living with my dad, a nomadic horse trainer.  We moved every six months, sometimes very suddenly.  I’m not sure why except my dad was restless.  He went from one horse training job to the next, always hoping the next one would be better.  Sometimes, he’d get a job managing a huge riding stable, taking care of up to a hundred horses.  Other times, he just trained a few show horses for persons of wealth.  We lived on lavish farms and in tiny cramped cabins.  We lived above and next to barns and, once, actually in the barn.

I  learned to pack really fast and not grow attached to any objects.

I was nearly 30 before I bought an actual home furnishing. A Moroccan lamp.  I remember feeling really weird about buying it.  Like now I had this THING to take with me everywhere.  I felt some sort of responsibility for this beautiful THING.

My boyfriend, though he does practice yoga, has missed the non-hoarding boat.  The first time I walked into his old apartment, I almost vomited.  There was stuff EVERYWHERE.  Mostly magazines and newspapers, in leaning towers, in every corner.  But other stuff too. He had something like 50 rolls of toilet paper.  Six jars of sunflower seed butter.  80 boxes of tea.

Fortunately, he has a lot of good qualities, so I gritted my teeth, bought a bunch of garbage bags, and helped him throw out 80% of his stuff.  Now, we live together and he claims he has NO STUFF,  that I’ve thrown it all out.  So he hoards things in small, secretive ways.

He’s really skinny and eats constantly, so he has his office right next to the kitchen and he can do whatever he wants in that kitchen so long as, once in a while, I can get a meal from it.  I’m not even sure what all goes on in that kitchen.

Five minutes after he left for a trip to Boston, I opened the fridge to look for a snack, and suddenly, I saw it.  EXPIRED FOOD.  HALF ROTTEN VEGETABLES. Mysterious pools of STICKY STUFF. 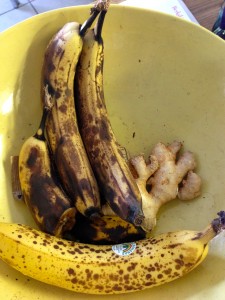 I started pulling open kitchen cabinets and drawers.  STUFF EVERYWHERE.  More Ziploc baggies than the Van Patten Family could use in a lifetime.

I started hyperventilating.  The dogs, sensing my agitation, started barking and Stevie, the 10-month old pup, snatched a grimy-looking dish towel off the counter and raced outside to shred it.

I got out a garbage bag and started gleefully throwing stuff out.  Eventually, I had to stop myself or I was going to throw out everything in the house.

The thing is, my boyfriend is a man, so he probably won’t even notice that he’s missing seventeen yellowed containers, five expired yogurts, and several jars of BROWN STUFF.  And, at the end of the day, it’ll all work out.  Maybe my boyfriend will start to hoard less, maybe I’ll stop throwing EVERYTHING out.

On a hoarding-related note, here is a sad and horrible thing: My dear friend Susan Roth sent an email that the Kingston, NY, SPCA has just intervened in an extreme hoarding case.  103 cats and kittens were seized from a hoarder and they are at the Kingston SPCA, getting care, and will eventually all need homes.  Here is a link if you’d like to help by making a small donation or, better yet, adopting some cats: UCSPCA.

Then, when your cats are away, you can throw out all their stuff.

2 thoughts on “Non-Hoarding (When The Cat’s Away, Throw His Stuff Out)”