The first blizzard is headed for upstate New York and the weather forecasts sound like the last paragraph of James Joyce’s The Dead.

When I was a youngster, I remember hearing that William Burroughs’ advice to writers was simply:  “Read the last paragraph of The Dead. A lot.”

So I did.   I even took a few snippets and worked them somewhere into my first novel.  The copy editor corrected it.  Not for being James Joyce, but for some other infraction.

I especially love the last line: “His soul swooned slowly as he heard the snow falling faintly through the universe and faintly falling, like the descent of their last end, upon all the living and the dead.”

I wanted to give Mickey a good long walk this afternoon since we will be barricaded in by snow tomorrow.  So we went to The Historic Site That Shall Remain Nameless where Lulu the Cat is buried.  When she died, the area where she is buried was leafy and green and lovely. Now it is barren and cold but has a fine view of a lake.  I could hear her little warrior cat soul swooning as the bare branches ached and the ice on the lake made singing sounds. 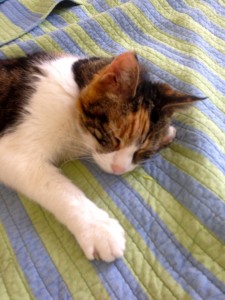 When I first moved to upstate New York, my friend Jenny Meyer began visiting me whenever she could wrestle a few days away from the city.

She would always arrive toting lots of luggage and extra coats and scarves, as if heading for the deep Artic (which upstate New York IS to a girl from Queens via Tehran) – even in summer.    She would go to the guest room, put on a comfortable outfit (comprised entirely of loose red clothing topped off by tan cotton socks) and pretty much stay put, studying Sanskrit, complaining violently at the suggestion of going anywhere. 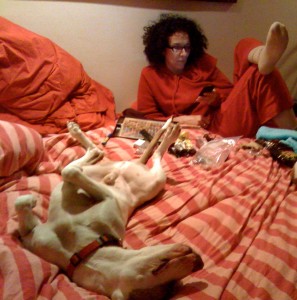 Over time, Jenny started leaving tan socks at my place. A lot of tan socks.  It was my job, once Jenny’s visit was over, to launder her red things and her tan socks too so they’d be clean next time she visited.  I dutifully complied.

At some point,  I got low on socks and I started wearing Jenny’s tan socks.  They were remarkably comfortable.

Then, as will happen, I started losing the socks.  A year or so ago, there were still at least three tan socks.   Then, it got down to ONE.

Stevie loves socks. They are the greatest things humans ever invented for amusing dogs. 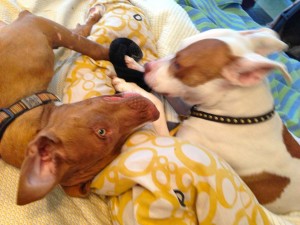 A couple weeks ago, Mickey and I moved to an apartment here in Hudson.  I want to live alone and COMPLETELY clutter-free so I brought only essentials, leaving  the rest behind, including Jenny Meyer’s last tan sock.

Sometimes Stevie destroys socks, other times he merely transports then room to room.  Occasionally, Mickey will grab one end of a sock and play sock tug, but, mostly, Stevie is on his own with the sock game.

At some point, Jenny Meyer’s last tan sock got loose in the house and I noticed Stevie transporting it.  But I couldn’t catch him and Jenny hadn’t been up to visit in quite some time so I just shrugged, vowed to buy replacement tan socks, and let Stevie have the last tan sock.

Today, after visiting Lulu’s grave, Mickey and I went to see Stevie.  He greeted us by bounding over to the front gate with what appeared to be part of a deer leg in his mouth.  It was fawn-colored and funny-shaped like the half a deer leg Mickey found in the woods one time. 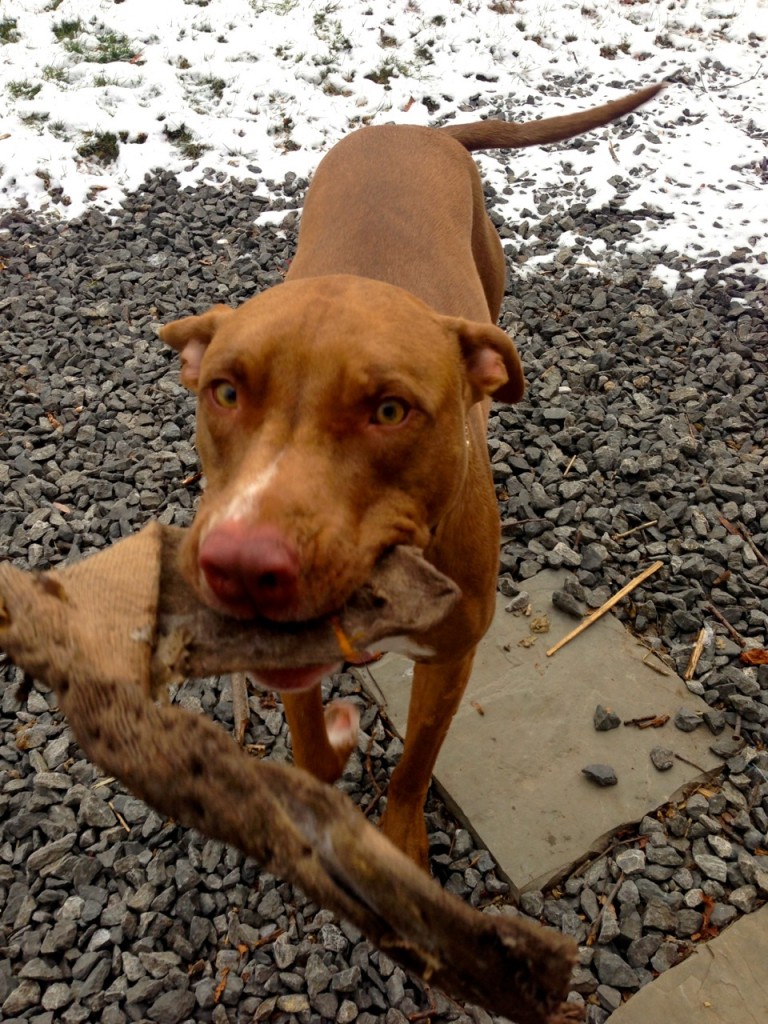 On closer inspection, I saw the little orange SOCK SEAM and realized it was the last of Jenny Meyer’s tan socks.  Frozen into the shape of a deer leg.

Stevie was very proud of it, kept thrusting it toward Mickey and me, trying to get one of us to play Frozen Tan Sock Tug.

But it was too cold out.  Eventually, Stevie dropped the tan sock and we all went inside and the dogs played with an unfrozen sock.

As for the last tan sock, it is out there, near the garden gnomes, twisted into its deer leg shape, waiting for the blizzard, waiting for the descent of its last end.   By spring, maybe it will have new life.