I don’t care for bamboo.  I don’t like the plant and I really don’t like flooring made from it.

So I moved to an apartment with bamboo floors.

Co-habitation wasn’t working for me.  I’m not good at dealing with other people’s STUFF.  So I chose bamboo over cohabitation.  And Mickey and I moved into a cheerful apartment with BAMBOO FLOORS.

Three years ago, I shared an apartment in Bed Stuy with my friend Cody.  It was a huge apartment and Cody was seldom home – so that worked.   But our small garden was infested with bamboo.  Some genius had planted a really invasive strain of herbaceous bamboo and its root system completely took over much of lower Bed Stuy.  I was frantically trying to grow flowers in that little garden and everything got devoured by bamboo.  I spent DAYS trying to dig up the entire root system, even though it probably originated blocks away.  I befriended neighbors so I could go into their yards and pull out their bamboo roots. They probably thought I was being Really White but, it was a friendly block and everyone humored me and pretended to understand.

I never got a handle on the bamboo there and we never had much of a garden and, anyway, I decided to move back upstate, away from the bamboo.

But bamboo is very popular.  It is, as my new landlord says, “rapidly renewable” and thus embraced by builders with a conscience. It is also cheap.  BECAUSE IT LOOKS LIKE PLASTIC.  See here (and if it looks sort of good to you in this picture it is just that the eye is pleased by the sight of the dog and successfully distracted from the plastic-y sheen of the bamboo. 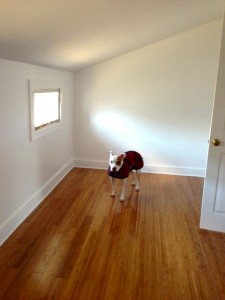 Here, in contrast, is a picture of Mickey on the beautiful wood floor at Sadhana Yoga.  No comparison, right? 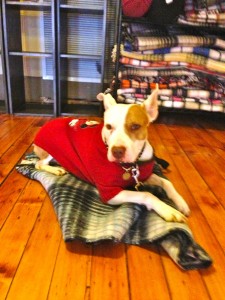 Mickey is still adjusting to our new digs.  And looked suicidal the other day when I was heading out to teach yoga, so I took him with me.

This was a class for a group of developmentally disabled adults.  We’ve been working together for over a year and have a nice camaraderie going.  Some of the gang have met Mick before and they’re always asking about him, plus I trust Mick completely.

So off to yoga we went.

The students arrived and their faces lit up at the sight of Mickey, standing there, wagging his tail.  As they put out their yoga mats and got onto the floor, Mickey went over to each person, carefully sniffed each one, licked some hands and cheeks.

I made him a nest of yoga blankets in the back of the room and gave him a treat and he went to curl up while we started the class.

When it was time for rest at the end of class,  Mickey got up from his nest and trotted from one supine person to the next.  Some hugged him, some just lay there beaming as he licked them. He seemed to have excellent instincts about who needed what kind of attention. 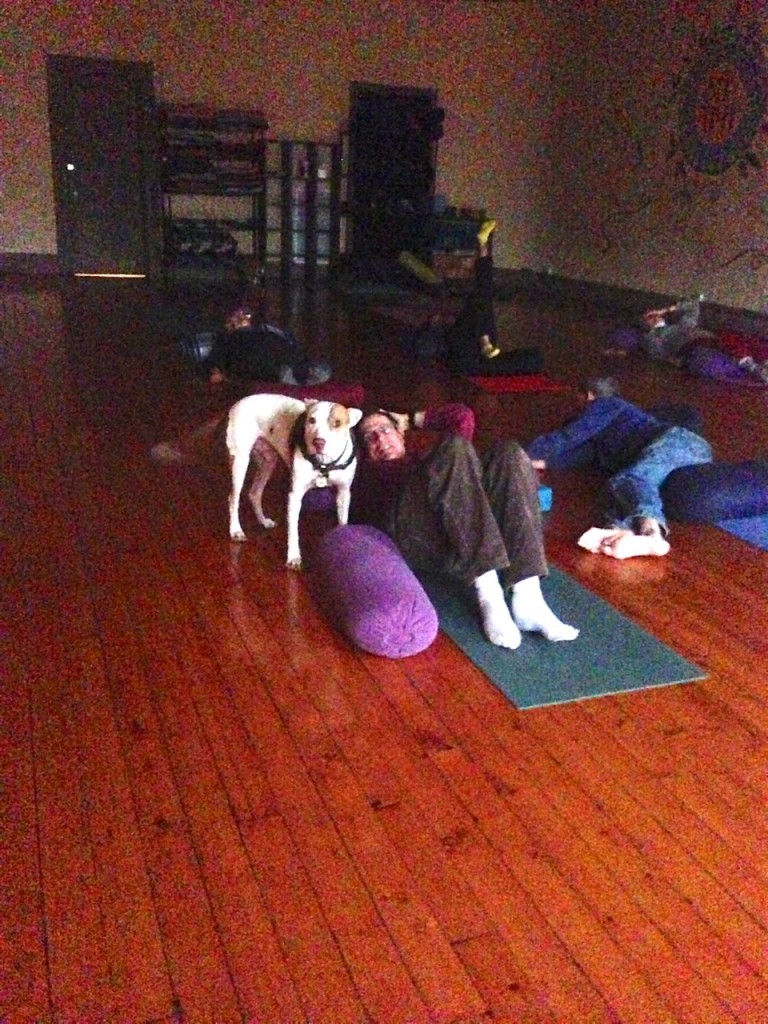 Now perhaps I can buy him an orange therapy dog vest and fly him in the cabin of airplanes with me when I need to go someplace.

In the Vietnam War, where booby traps were popular, bamboo was employed regularly, fashioned into vicious spikes. 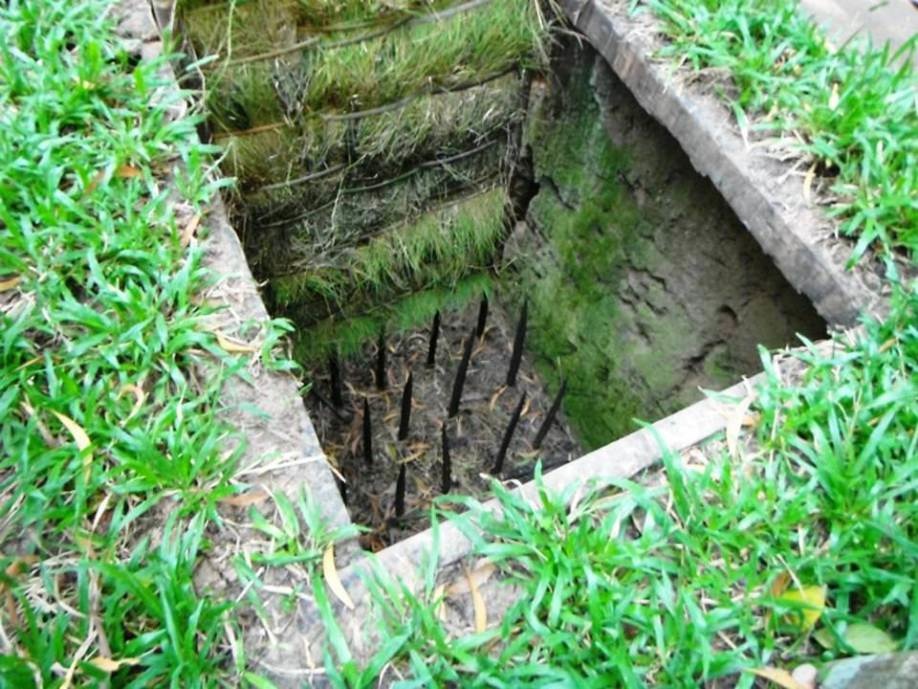 I was a small child during the Vietnam war so it’s not like I have some sort of direct bamboo booby trap PTSD, but I do hate the stuff.

One sees bamboo plants in the offices of massage therapists and acupuncturists and I’m sure bamboo has many lovely qualities, perhaps even healing qualities, but I don’t want to know what they are because I prefer to coddle my grudge.

I think one has to be a really advanced person to live completely free of resentment and grudges. Most of us need some sort of pet peeve to hold onto and carry around like a pet rock, taking it out of our pocket from time to time to rub it and coddle the grudge.  Maybe, as such things go, bamboo isn’t so bad.