Unless you want to spend a lot of money, it is virtually impossible to find non-padded bras.  Seriously.  H&M, the Gap, Macy’s.  You can get a no-nonsense jogging bra that smashes your breasts like pancakes or you can get padded bras that may also serve as Personal Flotation Devices in the event of a water landing.   No such thing as a simple unlined black lace bra in the world’s cheap stores. 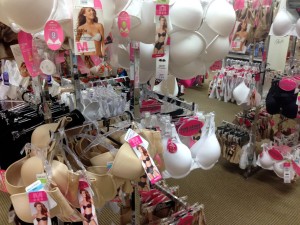 Should this concern you if you’re a man?  Probably.  Women’s under things should concern everyone.

In more upscale stores, I see unlined bras.  In high-end lingerie stores, there is barely a padded bra in sight.  But the bras cost close to a hundred bucks.

Does this mean something demographically?  Like that poor and working class women want gigundo breasts?  Only women shopping for $100 bras are okay with non-boob-job looking boobs?

My friend and mentor Andrew Vachss used to say that men’s tastes for curves and flesh on women were directly proportionate to income.  That working class men like some bounce on their women.  The rich, not so much.

In the olden days, only peasants had sun tans.  In more modern times, being bronzed all over no matter how much skin cancer may result is often an ideal.

I guess I have rich woman taste.  From the time I was approximately four years old, my grandfather would tell me: “You have champagne tastes and a beer budget.”  I was trying to get him to take me shopping at Barney’s by age 10.  I don’t know why really, except the clothes were beautiful and well-made.  They were art.  The clothes at the places he’d take me, not so much.  They felt funny against my skin. They looked like potato sacks.   Much later in life, I had a run of a few really good financial years and had some forays into buying myself stuff at Barney’s.  I was always amazed the sales women weren’t rushing into my dressing room to make sure I wasn’t shoplifting.  I actually CONSIDERED shoplifting because the were no security devices on the clothes and things were pretty lax.  But I would have felt guilty and, anyway, at the time, I could afford it. Sort of.

I don’t want gigundo breasts.  I put one of those padded bras on and I look like a third-rate sex worker.  Like my old friend Kat as she was winding her way down the ranks as an aging stripper.  She was still dancing well into her 40’s, but she had to go out to Queens to get work as her skin lost its dewiness and her proud gorgeous tits began to slowly slope downward.

Actually, I don’t look half as good as Kat when I put on a Personal Flotation Device bra.  I just look like a garden gnome with an unfortunate boob job.

Sometime around 2002 or so,  it got so one couldn’t find inexpensive bras that wouldn’t serve as Personal Flotation Devices.  The rare unlined bra that might find its way into the bra section at modest stores was not actually functional as a bra but had a sole use as Sex Garment.

For years, I’ve mostly worn little “bra-lettes” from the Gap.  Utilitarian sporty type unlined cotton shelf bras that don’t totally smash my tits but don’t augment them to fake boob status either.  But, lately,  for Realtor Life,I’ve had to put together some grown up outfits involving elegant button down shirts that button down very low and prominently display my no-nonsense bra-lettes.  So I went bra shopping.

I went to seven different stores, all crammed with rack upon rack of rack-augmenting Personal Flotation Devices. Finally, at Macy’s, I found an unpadded Calvin Klein bra that didn’t cost a gazillion dollars, functioned as a bra, and was actually pretty. Here. 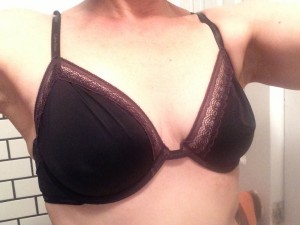 So what’s the deal?  Women of modest means must have giant fake-looking breasts while the wealthy may have delicate tea cup tits?