The other night, after a freakishly strong thunderstorm, I got home and found that the neighbor’s tree had crashed into our yard, taking down part of the fence and some flowers but mercifully not harming dogs, people, house, or GNOMES. 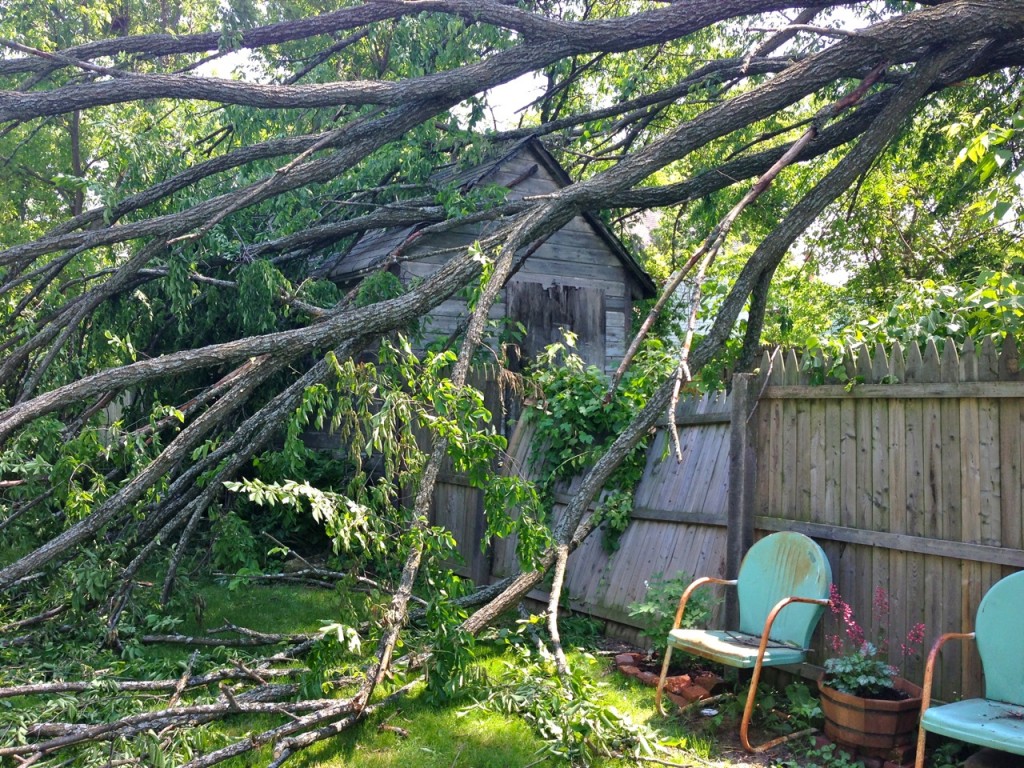 The next day, as my boyfriend, two tree guys, Stevie the Dog, and the  neighbor whose tree tried to kill us, all stood around staring at the tree, I packed up Mickey and drove down to Brooklyn to stay at my friend John’s house for a few nights.  Not because a tree had tried to kill me, but because I wanted to spend time with my City People and also was reading for the Howl Festival.

The Howl Festival was really really really hot.  Not Laura the Hot Farmer Hot.  90 something degrees and set up mostly in the sun and, accordingly, kind of sparsely attended (though I got to see people I adore, Mike Doughty, Edwin Torres, Bob Holman, and, perhaps best of all, heard Todd Colby read TAKE THE BULL BY THE HORNS).

Because it was a weird distracting set-up for a reading, I read, among other things, FUCK ME, which I haven’t read in a long time.

When I toured with Lollapalooza, I was known as The Fuck Me Girl because anytime the audience was bored or restless I would read Fuck Me and people would become a bit more attentive.

I had planned on maybe bringing Mickey onstage with me at the Howl Festival and having him eat a noodle (his infamous noodle video here for those who haven’t seen it) but it was so hot and uncomfortable, he stayed in the audience with my friends.

The whole time I was onstage, Mickey stared, his ears at full mast.  He’d never heard me read Fuck Me.

He was VERY attentive.

This might be a good time to mention Mickey’s nascent modeling career.

While some dogs like to herd sheep, and other dogs like to sleep on couches all day eating potato chips, ALL dogs want to understand their place in our crazy lives and all dogs, in one way or another, need jobs.

Mickey would totally suck at herding sheep and though he enjoys a good couch and a snack, what he loves best is to meet new people, go new places and, especially, get photographed. He is VERY aware of cameras and considers it his job to present his best angle. 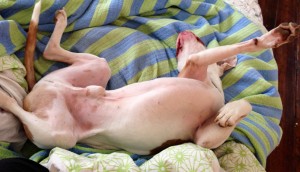 He seems to have had this knack even before I adopted him six years ago.   His photos from NYC Animal Care and Control show a severely emaciated dog looking RIGHT at the camera. Not in that fearful, defeated way many of the poor dogs at ACC look at the camera, but giving a distinct Come Hither Glance.  Even though he was 60% underweight and slated to be euthanized because he had kennel cough, Mickey was POSING.  On death row.

So, when a company in Massachusetts, Dash and Albert Rugs, announced they were having an open casting call for a dog model, I scheduled Mickey to audition.

I personally HATE auditioning.  It’s dreadful and demoralizing.  I did it about ten times at the height of my Fuck Me Girl fame, and I just found it HORRIBLE and embarrassing and promptly decided to stick to writing books rather than pursuing bit parts on Law and Order.

Just as border collies have it in their DNA to know what to do with unruly sheep, Mickey apparently has it in his DNA to know how to do an audition.  There were other dogs all around, some barking at him, but he completely ignored them and sat down, widened his eyes, and gave come-hither glances to the people checking the dogs in.

When we were ushered into the room where the cameras were set up, Mickey looked at me as if to say: Finally, my job.

With extreme poise, he sat, stood, put his ears straight up, widened his eyes.  He seemed bitterly disappointed when the photographer only took about a dozen shots.  He would have very happily stayed there for HOURS.

Now, Mickey has gotten a callback.  For better or worse, the finalists have all been posted on Facebook and the rug model dog will be chosen by vote.  Voting started a couple of days ago and goes till June 9th and you can (and should, for the sake of my dog’s mental well-being) vote once a day and get everyone you know to do it too. Voting link here.

Mickey is currently only in SIXTH place (you can’t vote from a mobile device, a glitch probably rigged by one of the, um, PUREBRED non-death-row-surviving FANCY DOGS).  So it’s sort of a pain in the ass.  But think of how happy you will make the Dog from Death Row and the Fuck Me Girl.  We’re worth it.  I swear, we are.