The other night, I was hanging out with my girlfriends Corinne and Hannah (not their actual names but sort of close). We were yakking about our lives, struggles and loves.

Then, as will happen, the subject turned to stripping.

I think I launched us onto the topic by saying “I always used to figure if I got really broke, I could be a stripper again but, at this point, I wouldn’t be getting top dollar.”

Corinne and Hannah nodded.  Both had come to the sobering realization that they’d reached an age when stripping might not be lucrative.  Mind you, Hannah and Corinne are both gorgeous and very successful.  But those of us who’ve been to the far edges of sanity and insolvency never forget staring into that black maw.  And, from time to time, we think:  Could I still get paid to dance naked?

As I’ve written about before, my stripper career was very brief  and I was terrible at it because I couldn’t quite get used to the feeling of being NAKED IN A ROOM FULL OF STRANGERS.

Hannah, who is blond and extroverted probably did really well (plus, she’s from Texas) and Corinne too.   In fact,  Corinne demonstrated her skill right then and there by reenacting her strip club audition whilst wearing a baggy black sweat suit covered in plaster dust.   She suddenly dropped into a split,  then came back up, shook her ass at us, humped the floor, and did a few other agile and salacious moves. 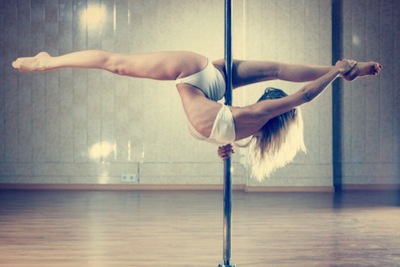 Not actually Corinne and you can’t have her number

Side Boob of Laura The Hot Former, retired stripper

Smart Women Who Have Stripped probably warrants a whole essay, but I don’t have time for that now because I have to tell the story of The Great Umlaut Cake.

Back when I was touring and performing a lot, I dressed like a rock chick.  You know, short skirts, ripped stockings, boots,  bra straps hanging out, that kind of thing.  My BFF Jenny Meyer loved the way I dressed but, she also loved calling me SLUT when I wore a particularly short skirt.   Then, “Slut” got to be a nickname.  Women love to call one another “slut, ‘ho, hooker, whore, tramp, trollop” and the like.  Making those words ours. And only ours.

This morning, I was typing an email to my friend/yoga student Klodin who speaks  many languages and veers between English, French and Italian in the course of a few sentences. My French is severely dormant so I practice by emailing in French. Of course, Google knows everything, so Gmail knew I was typing in French and helpfully gave me auto correct IN FRENCH.  It got confused though when, halfway through the email,  I switched to English.  It thought I was speaking Swedish and put an umlaut over the “I” in the word HAIR.    I sent the email as is.  It probably didn’t make much sense, but few things do and, anyway, Klodin is good at finding sense where there is little sense.

This Google-inflicted umlaut reminded me of The Great Umlaut Story.

One year, maybe twelve or so years ago, for my birthday, my BFF Jenny went to get me a cake at Venerio’s in NYC.  I passionately love the fluffy white birthday cake from Venerios and even though Jenny hates the stuff, it was my birthday, so she ordered me a fluffy white cake and brought it to a big birthday dinner we were having at an Indian restaurant. She took the cake to the kitchen and the waiters were kind enough to bring it out at Jenny’s signal.  It had candles and the whole restaurant was singing Happy Birthday to me and then the waiter  deposited the cake in front of me.  In red it said: “Happy Birthday Slut” 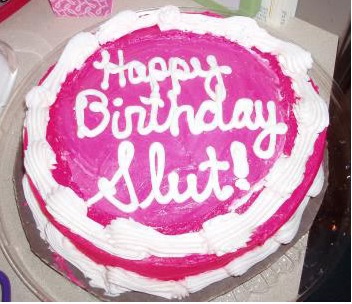 Not the actual Umlaut Cake, which was MUCH prettier

We all laughed so hard we spat on the cake turning it into a Germ Cake, but we’d survived worse, so we ate it.

The best part was how Jenny had gotten the very matter-of fact and non-jovial cake-decorators at Venerio’s to write SLUT on one of their beautiful fluffy white cakes.

“I told them to write happy birthday Sluuut.  They asked for the spelling. I said: S. L. U. T with an umlaut over the U.  I told them the cake was for my friend who is Swedish.  Then, as soon as I left Venerios, I opened the cake box and wiped the umlaut away.”

And that is the story of the Great Umlaut Cake of slutdom and three ex-strippers sitting at a table.

So today Mickey and I traveled over to Acra, NY, to hang out as a photographer shot the house of prohibition-era gangster Legs Diamond. 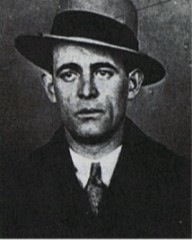 It’s kind of fitting that, in my nascent realtor career, the sellers I’m representing have a house that belonged to a gangster.

I’ve had a fifteen-plus years love/hate relationship with The Angelmakers, the female gangster book I’ve written seven times and not yet gotten right.

I once nearly had a fist fight with Martin Scorcese in Rome over his (shocking to me) amalgamation of three female gangster characters into one for the movie adaptation of Gangs of New York. 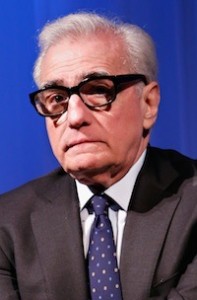 I read the book Gangs of New York many many times.  And Luc Sante’s Low Life and hundreds of other books on the subject of outlaws in New York.   I am soaked in gangster lore and now I’m selling a gangster house.

I was sitting in the real estate office one day when a Greek couple came in.  They looked at me intensely and said:  “Will you sell Legs Diamonds house for us?”

I thought they were joking.  But they looked very serious.  The man especially.  He refused my offer to sit and stood with his hands clasped behind his back, staring ahead, as his wife, a curvaceous lovely blonde in spike heels, told me about Legs Diamond’s house.  They had owned it for twelve years but they spent little time in it and now wished to sell it.  Would I like to represent them.

Never mind that it’s on a busy-ish road and vaguely in the middle of nowhere, I instantly knew I was destined to sell this house. 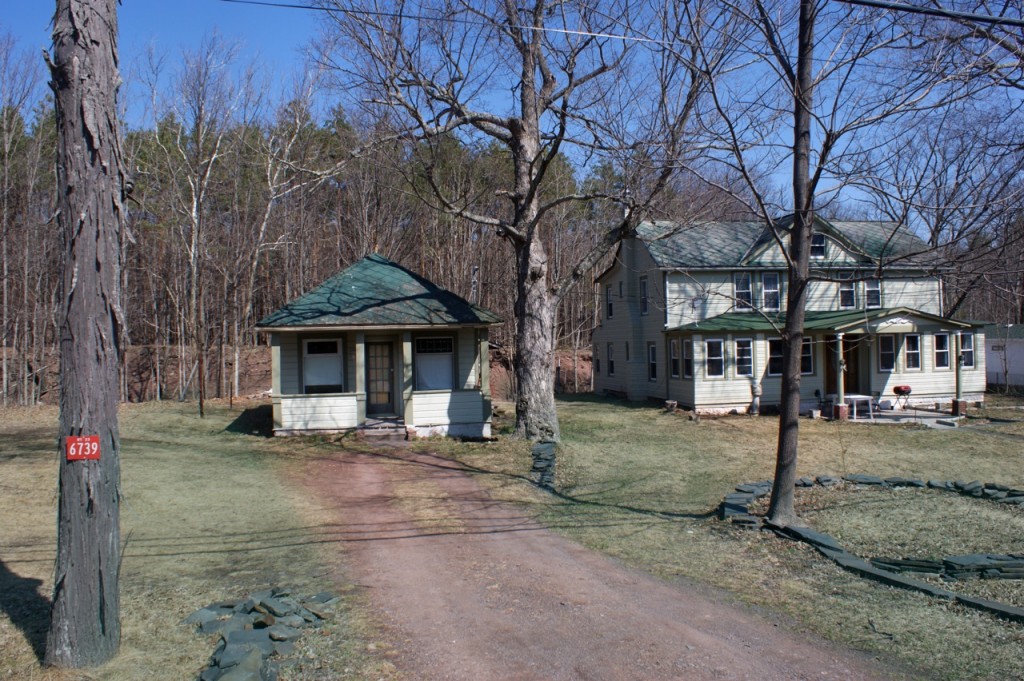 Legs Diamond was sometimes known as “The Clay Pigeon” because he survived being shot like 57 times.  Okay.  Maybe four times, but still. One time it was three at close range to the heart.  And he lived on. And on. Until he didn’t.  I think the fifth time, he was shot in the back of the head and that finally did him in.

According to lore (and I haven’t read William Kennedy’s well-regarded tome LEGS to check on all this) Mr. Diamond moved to the house in Acra with his bodyguard, his gang, his wife, and his mistress.  He had guard dogs, flood lights and, according to the guy who used to own the now-defunct bar across the road, a tunnel from his basement to the bar’s basement. 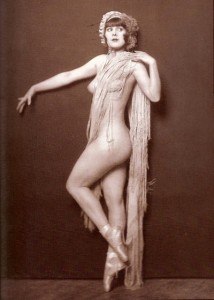 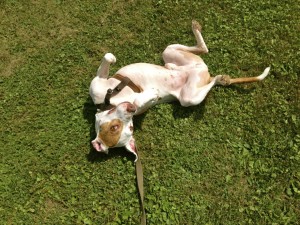 The Greek couple have searched and searched for the tunnel (Mrs. Greek Couple feared someone tunneling IN to the house) and if it did once exist, it has since been closed up.

But perhaps I can lure potential buyers with the promise of a hidden tunnel. Not to mention the fact that it’s a cool, rambling house with amazing original light fixtures,  and four bungalows dotted along the two acre spread.

It started pouring rain as soon as the photographer and I arrived at the house so we had to scrap plans for exterior shots and Mickey refused to get out of the car.

All the same, I suggested The Greek Couple remove the patio furniture from the front porch.

Earlier in the day, I had emailed my private yoga student Klodin a picture of the house, explaining I had to go on a little road trip to have it photographed.

“Just remove the clutter from front porch, take pictures, and come back to teach me yoga.”

I did want the stuff moved from the front porch but didn’t want to be indelicate with The Greek Couple who were perhaps attached to having that stuff there.

“I have a friend,” I said, “he’s Italian.” I paused, knowing this alone could explain many things, “he said the photos would look nicer without any stuff on the front porch.”

Mr. Greek Couple muttered “Italians,” shook his head once, then said “Yes, the Italian is right.”

In fact, Klodin (who is not Italian and is not named Klodin) was right.  The house looked a lot better without stuff in front of it.

And soon I will sell it to someone who wishes to soak in gangster lore. Then, maybe, I’ll get my damn gangster girls book done for good.